is the gain of the amplifier and C is the feedback capacitance.

Although the term Miller effect normally refers to capacitance, any impedance connected between the input and another node exhibiting gain can modify the amplifier input impedance via this effect. These properties of the Miller effect are generalized in the Miller theorem. The Miller capacitance due to parasitic capacitance between the output and input of active devices like transistors and vacuum tubes is a major factor limiting their gain at high frequencies. Miller capacitance was identified in 1920 in triode vacuum tubes by John Milton Miller.

The Miller effect was named after John Milton Miller.[1] When Miller published his work in 1920, he was working on vacuum tube triodes; however, the same theory applies to more modern devices such as bipolar and MOS transistors. 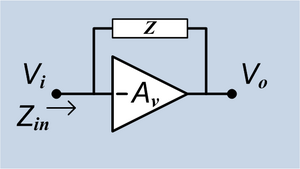 Figure 1: An ideal voltage inverting amplifier with an impedance connecting output to input.

connected between its input and output nodes. The output voltage is therefore

. Assuming that the amplifier input draws no current, all of the input current flows through

, and is therefore given by

The input impedance of the circuit is

If Z represents a capacitor with impedance

, the resulting input impedance is

As most amplifiers are inverting (

as defined above is positive), the effective capacitance at their inputs is increased due to the Miller effect. This can reduce the bandwidth of the amplifier, restricting its range of operation to lower frequencies. The tiny junction and stray capacitances between the base and collector terminals of a Darlington transistor, for example, may be drastically increased by the Miller effects due to its high gain, lowering the high frequency response of the device.

and amplifier outputs are typically low impedance. However if the amplifier has a high impedance output, such as if a gain stage is also the output stage, then this RC can have a significant impact on the performance of the amplifier. This is when pole splitting techniques are used.

The Miller effect may also be exploited to synthesize larger capacitors from smaller ones. One such example is in the stabilization of feedback amplifiers, where the required capacitance may be too large to practically include in the circuit. This may be particularly important in the design of integrated circuits, where capacitors can consume significant area, increasing costs.

The Miller effect may be undesired in many cases, and approaches may be sought to lower its impact. Several such techniques are used in the design of amplifiers.

between the input and output terminals of the amplifier (though not necessarily the overall gain). For example, a common base may be used as a current buffer at the output of a common emitter stage, forming a cascode. This will typically reduce the Miller effect and increase the bandwidth of the amplifier.

Alternatively, a voltage buffer may be used before the amplifier input, reducing the effective source impedance seen by the input terminals. This lowers the

time constant of the circuit and typically increases the bandwidth. 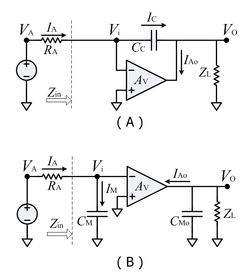 Figure 2A shows an example of Figure 1 where the impedance coupling the input to the output is the coupling capacitor CC. A Thévenin voltage source VA drives the circuit with Thévenin resistance RA. The output impedance of the amplifier is considered low enough that the relationship Vo= AvVi is presumed to hold. At the output ZL serves as the load. (The load is irrelevant to this discussion: it just provides a path for the current to leave the circuit.) In Figure 2A, the coupling capacitor delivers a current jωCC(Vi − Vo) to the output node.

or, rearranging this equation

This result is the same as CM of the Derivation Section.

The output voltage of this simple circuit is always Av vi. However, real amplifiers have output resistance. If the amplifier output resistance is included in the analysis, the output voltage exhibits a more complex frequency response and the impact of the frequency-dependent current source on the output side must be taken into account.[3] Ordinarily these effects show up only at frequencies much higher than the roll-off due to the Miller capacitance, so the analysis presented here is adequate to determine the useful frequency range of an amplifier dominated by the Miller effect.