Method of images (or method of mirror images) is a mathematical tool for solving differential equations in which the domain of the sought function is extended by the addition of its mirror image with respect to a symmetry hyperplane, with the purpose of facilitating the solution of the original problem. It is used in electrostatics to simply calculate or visualize the distribution of the electric field of a charge in the vicinity of the conducting surface. It is based on the fact that the tangential component of the electrical field to the surface of a conductor is zero, and that some field E with

in some region is uniquely defined by its normal component over the surface which confines this region (the uniqueness theorem).

The method may also be used in magnetostatics for calculating the magnetic field of a magnet which is close to a superconducting surface. Here, the component of the magnetic field normal to the superconductor is zero. Another use is in fluid dynamics: the movement of a vortex near a wall may be calculated using an image vortex.

Fig. 1. The field of a positive charge above a flat conducting surface, found by the method of images.

A textbook example is an infinite flat conducting surface (see Fig. 1). In this case the field distribution between the surface and a charge is the same as between this charge and another charge (imaginary charge), which is the mirror image of the real charge in respect to the surface but has the opposite sign. Evidently, in case of an electrical dipole, the vector of the mirrored dipole will have the opposite sign. Therefore, the force between the electrical charge or system of charges and the conducting surface is attractive. It is also interesting (but not obvious) that the total surface charge influenced on the conducting surface (which can be obtained by integration of the surface charge, for example) exactly matches the opposite value of the point charge (-q). 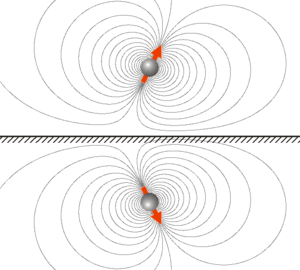 Fig. 2. A magnetic dipole over the superconducting surface. The field between the magnet and surface is the same as between this magnet and a symmetric one.