The membership function of a fuzzy set is a generalization of the indicator function in classical sets. In fuzzy logic, it represents the degree of truth as an extension of valuation. Degrees of truth are often confused with probabilities, although they are conceptually distinct, because fuzzy truth represents membership in vaguely defined sets, not likelihood of some event or condition. Membership functions were introduced by Zadeh in the first paper on fuzzy sets (1965).

, a membership function on

is any function from

to the real unit interval

. The membership function which represents a fuzzy set

is usually denoted by

is called the membership degree of

in the fuzzy set

quantifies the grade of membership of the element

to the fuzzy set

The value 0 means that

is not a member of the fuzzy set; the value 1 means that

is fully a member of the fuzzy set. The values between 0 and 1 characterize fuzzy members, which belong to the fuzzy set only partially. 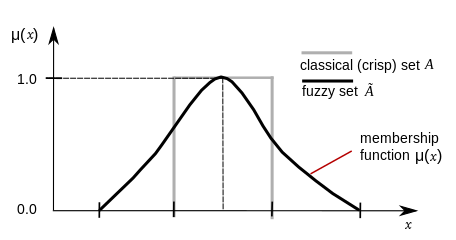 Membership function of a fuzzy set

Sometimes,[1] a more general definition is used, where membership functions take values in an arbitrary fixed algebra or structure

; usually it is required that

See the article on capacity for a closely related definition in mathematics.

One application of membership functions is as capacities in decision theory.

In decision theory, a capacity is defined as a function,

from S, the set of subsets of some set, into

is set-wise monotone and is normalized (i.e.

This is a generalization of the notion of a probability measure, where the probability axiom of countable additivity is weakened. A capacity is used as a subjective measure of the likelihood of an event, and the "expected value" of an outcome given a certain capacity can be found by taking the Choquet integral over the capacity.