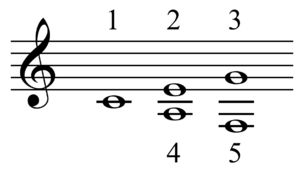 Schenkerian analysts consider this scale degree as expansion of the Tonic since they have two common tones.[6] On the other hand, in German theory derived from Hugo Riemann the mediant in major is considered the dominant parallel, Dp, and in minor the tonic parallel, tP.

"Mediant" also refers to a relationship of musical keys. For example, relative to the key of A (natural) minor, the key of C major is the mediant, and often serves as a mid-way point between I and V (hence the name). Tonicization or modulation to the mediant is quite common in pieces written in the minor mode, and usually serves as the second theme group in sonata forms, since it is very easy to tonicize III in minor (no need to alter notes). Tonicization of III in major is quite rare in classical harmony, compared with, say, modulation to the V in major, but mediant tonicization in major is an important feature of late romantic music.