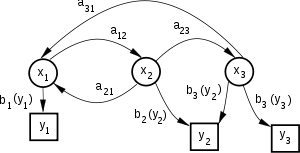 In probability theory and statistics, a Markov process or Markoff process, named after the Russian mathematician Andrey Markov, is a stochastic process that satisfies the Markov property. A Markov process can be thought of as 'memoryless': loosely speaking, a process satisfies the Markov property if one can make predictions for the future of the process based solely on its present state just as well as one could knowing the process's full history. i.e., conditional on the present state of the system, its future and past are independent.[1]

A Markov process is a stochastic model that has the Markov property. It can be used to model a random system that changes states according to a transition rule that only depends on the current state. This article describes the Markov process in a very general sense, which is a concept that is usually specified further. Particularly, the system's state space and time parameter index needs to be specified. The following table gives an overview of the different instances of Markov processes for different levels of state space generality and for discrete time vs. continuous time.

Note that there is no definitive agreement in literature on the use of some of the terms that signify special cases of Markov processes. For example, often the term "Markov chain" is used to indicate a Markov process which has a finite or countable state-space, but Markov chains on a general state space fall under the same description. Similarly, a Markov chain would usually be defined for a discrete set of times (i.e. a discrete-time Markov chain)[2] although some authors use the same terminology where "time" can take continuous values.[3] In addition, there are other extensions of Markov processes that are referred to as such but do not necessarily fall within any of these four categories (see Markov model). Moreover, the time index need not necessarily be real-valued; like with the state space, there are conceivable processes that move through index sets with other mathematical constructs. Notice that the general state space continuous-time Markov chain is general to such a degree that it has no designated term.

Markov processes arise in probability and statistics in one of two ways. A stochastic process, defined via a separate argument, may be shown mathematically to have the Markov property, and as a consequence to have the properties that can be deduced from this for all Markov processes. Alternately, in modelling a process, one may assume the process to be Markov, and take this as the basis for a construction. In modelling terms, assuming that the Markov property holds is one of a limited number of simple ways of introducing statistical dependence into a model for a stochastic process in such a way that allows the strength of dependence at different lags to decline as the lag increases.

be a probability space with a filtration

, for some (totally ordered) index set

be a metric space. An S-valued stochastic process

A Markov process is a stochastic process which satisfies the Markov property with respect to its natural filtration.

In the case where

is a discrete set with the discrete sigma algebra and

, this can be reformulated as follows:

{{#invoke:see also|seealso}} Suppose that you start with $10, and you wager $1 on an unending, fair, coin toss indefinitely, or until you lose all of your money. If

represents the number of dollars you have after n tosses, with

The process described here is a Markov chain on a countable state space that follows a random walk.

{{#invoke:see also|seealso}} Suppose that you are popping one hundred kernels of popcorn, and each kernel will pop at an independent, exponentially-distributed time. Let

denote the number of kernels which have popped up to time t. Then this is a continuous-time Markov process. If after some amount of time, I want to guess how many kernels will pop in the next second, I need only to know how many kernels have popped so far. It will not help me to know when they popped, so knowing

for previous times t will not inform my guess.

Suppose that you have a coin purse containing five quarters (each worth 25c), five nickels (each worth 5c) and five dimes (each worth 10c), and one-by-one, you randomly draw coins from the purse and set them on a table. If

represents the total value of the coins set on the table after n draws, with

is not a Markov process.

To see why this is the case, suppose that in your first six draws, you draw all five nickels, and then a quarter. So

. If we know not just

with probability 1. But if we do not know the earlier values, then based only on the value

we might guess that we had drawn four dimes and two nickels, in which case it would certainly be possible to draw another nickel next. Thus, our guesses about

are impacted by our knowledge of values prior to

In some cases, apparently non-Markovian processes may still have Markovian representations, constructed by expanding the concept of the 'current' and 'future' states. For example, let X be a non-Markovian process. Then define a process Y, such that each state of Y represents a time-interval of states of X. Mathematically, this takes the form:

If Y has the Markov property, then it is a Markovian representation of X.

The band Bad Religion has a song titled "The Markovian Process" on their album Stranger Than Fiction. The credited writer of the song, lead singer and current UCLA professor Greg Graffin, has a Ph.D. in zoology and degrees in anthropology and geology.