{{ safesubst:#invoke:Unsubst||$N=Refimprove |date=__DATE__ |$B= {{#invoke:Message box|ambox}} }} In mathematics, specifically algebraic topology, the mapping cylinder of a function

where the union is disjoint, and ∼ is the equivalence relation generated by

That is, the mapping cylinder

is obtained by gluing one end of

. Notice that the "top" of the cylinder

, while the "bottom" is the space

The bottom Y is a deformation retract of

), and a deformation retraction

stay fixed, which is well-defined, because

is a homotopy equivalence if and only if the "top"

is a strong deformation retract of

. A proof can be found in.[2] An explicit formula for the strong deformation retraction is produced in.[3]

The mapping cylinder may be viewed as a way to replace an arbitrary map by an equivalent cofibration, in the following sense:

, the mapping cylinder is a space

, together with a cofibration

and a surjective homotopy equivalence

(indeed, Y is a deformation retract of

), such that the composition 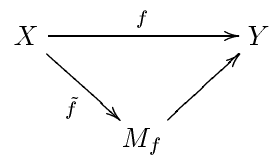 Thus the space Y gets replaced with a homotopy equivalent space

, and the map f with a lifted map

gets replaced with a diagram

together with a homotopy equivalence between them.

The construction serves to replace any map of topological spaces by a homotopy equivalent cofibration.

Note that pointwise, a cofibration is a closed inclusion.

Mapping cylinders are quite common homotopical tools. One use of mapping cylinders is to apply theorems concerning inclusions of spaces to general maps, which might not be injective.

Consequently, theorems or techniques (such as homology, cohomology or homotopy theory) which are only dependent on the homotopy class of spaces and maps involved may be applied to

with the assumption that

is actually the inclusion of a subspace.

Another, more intuitive appeal of the construction is that it accords with the usual mental image of a function as "sending" points of

and hence of embedding

despite the fact that the function need not be one-to-one.

Conversely, the mapping cylinder is the homotopy pushout of the diagram where

Given a sequence of maps

the mapping telescope is the homotopical direct limit. If the maps are all already cofibrations (such as for the orthogonal groups

Formally, one defines it as