Template:Essay-like Quantum mechanics is most often used to describe matter on the scale of molecules, atoms, or elementary particles. However, some phenomena, particularly at low temperatures, show quantum behavior on a macroscopic scale. The best-known examples of macroscopic quantum phenomena are superfluidity and superconductivity; another example is the quantum Hall effect. Since 2000 there has been extensive experimental work on quantum gases, particularly Bose–Einstein Condensates.

Consequences of the macroscopic occupation 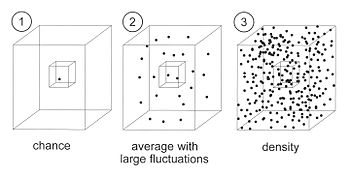 The concept of macroscopically-occupied quantum states is introduced by Fritz London.[3][4] In this section it will be explained what it means if the ground state is occupied by a very large number of particles. We start with the wave function of the ground state written as

with Ψ₀ the amplitude and

the phase. The wave function is normalized so that

The physical interpretation of the quantity

1. There is only one particle. In this case the control volume is empty most of the time. However, there is a certain chance to find the particle in it given by Eq.(15). The chance is proportional to ΔV. The factor ΨΨ∗ is called the chance density.

3. In the case of a very large number of particles there will always be a lot of particles in the small box. The number will fluctuate but the fluctuations around the average are relatively small. The average number is proportional to ΔV and ΨΨ∗ is now interpreted as the particle density.

In quantum mechanics the particle probability flow density Jp (unit: particles per second per m²) can be derived from the Schrödinger equation to be

with q the charge of the particle and

the vector potential. With Eq.(13)

If the wave function is macroscopically occupied the particle probability flow density becomes a particle flow density. We introduce the fluid velocity vs via the mass flow density

The density (mass per m³) is

This important relation connects the velocity, a classical concept, of the condensate with the phase of the wave function, a quantum-mechanical concept.

Fig.2 Lower part: vertical cross section of a column of superfluid helium rotating around a vertical axis. Upper part: Top view of the surface showing the pattern of vortex cores. From left to right the rotation speed is increased resulting in an increasing vortex-line density.

Below the lambda-temperature helium shows the unique property of superfluidity. The fraction of the liquid that forms the superfluid component is a macroscopic quantum fluid. The helium atom is a neutral particle so q=0. Furthermore the particle mass m=m₄ so Eq.(20) reduces to

For an arbitrary loop in the liquid this gives

Due to the single-valued nature of the wave function

with n integer, we have

is the quantum of circulation. For a circular motion with radius r

When superfluid helium is put in rotation Eq.(25) will not be satisfied for all loops inside the liquid unless the rotation is organized around vortex lines as depicted in Fig.2. These lines have a vacuum core with a diameter of about 1 Å (which is smaller than the average particle distance). The superfluid helium rotates around the core with very high speeds. Just outside the core (r = 1 Å) the velocity is as large as 160 m/s. The cores of the vortex lines and the container rotate as a solid body around the rotation axes with the same angular velocity. The number of vortex lines increases with the angular velocity as shown in the upper half of the figure. Note that the two right figures both contain six vortex lines, but the lines are organized in different stable patterns.[5]

For superconductors the bosons involved are the so-called Cooper pairs which are quasiparticles formed by two electrons.[6] Hence m = 2me and q = -2e where me and e are the mass of an electron and the elementary charge. It follows from Eq.(20) that

As in the case of helium we define the vortex strength

and use the general relation

where Φ is the magnetic flux enclosed by the loop. The so-called fluxoid is defined by

In general the values of κ and Φ depend on the choice of the loop. Due to the single-valued nature of the wave function and Eq.(28) the fluxoid is quantized

The unit of quantization is called the flux quantum

The flux quantum plays a very important role in superconductivity. The earth magnetic field is very small (about 50 μT), but it generates one flux quantum in an area of 6 by 6 μm. So, the flux quantum is very small. Yet it was measured to an accuracy of 9 digits as shown in Eq.(33). Nowadays the value given by Eq.(33) is exact by definition. 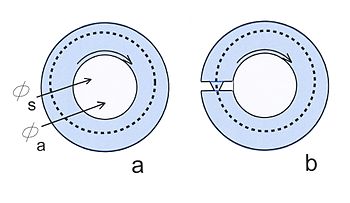 In Fig. 3 two situations are depicted of superconducting rings in an external magnetic field. One case is a thick-walled ring and in the other case the ring is also thick-walled, but is interrupted by a weak link. In the latter case we will meet the famous Josephson relations. In both cases we consider a loop inside the material. In general a superconducting circulation current will flow in the material. The total magnetic flux in the loop is the sum of the applied flux Φa and the self-induced flux Φs induced by the circulation current

The first case is a thick ring in an external magnetic field (Fig. 3a). The currents in a superconductor only flow in a thin layer at the surface. The thickness of this layer is determined by the so-called London penetration depth. It is of μm size or less. We consider a loop far away from the surface so that vs=0 everywhere so κ=0. In that case the fluxoid is equal to the magnetic flux (Φv=Φ). If vs=0 Eq.(27) reduces to

shows that the magnetic field in the bulk of the superconductor is zero as well. So, for thick rings, the total magnetic flux in the loop is quantized according to 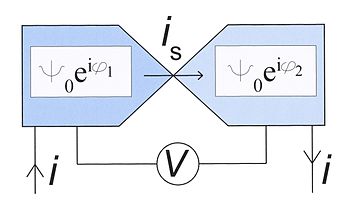 Fig. 4. Schematic of a weak link carrying a superconducting current is. The voltage difference over the link is V. The phases of the superconducting wave functions at the left and right side are assumed to be constant (in space, not in time) with values of φ1 and φ2 respectively.

Weak links play a very important role in modern superconductivity. In most cases weak links are oxide barriers between two superconducting thin films, but it can also be a crystal boundary (in the case of high-Tc superconductors). A schematic representation is given in Fig. 4. Now consider the ring which is thick everywhere except for a small section where the ring is closed via a weak link (Fig. 3b). The velocity is zero except near the weak link. In these regions the velocity contribution to the total phase change in the loop is given by (with Eq.(27))

The names of these relations (DC and AC relations) are misleading since they both hold in DC and AC situations. In the steady state (constant

) Eq.(41) shows that V=0 while a nonzero current flows through the junction. In the case of a constant applied voltage (voltage bias) Eq.(41) can be integrated easily and gives

This is an AC current. The frequency

is called the Josephson frequency. One μV gives a frequency of about 500 MHz. By using Eq.(44) the flux quantum is determined with the high precision as given in Eq.(33).

The energy difference of a Cooper pair, moving from one side of the contact to the other, is ΔE = 2eV. With this expression Eq.(44) can be written as ΔE = hν which is the relation for the energy of a photon with frequency ν.

The AC Josephson relation (Eq.(41)) can be easily understood in terms of Newton's law, (or from one of the London equation's[8]). We start with Newton's law

Substituting the expression for the Lorentz force

and using the general expression for the co-moving time derivative

Take the line integral of this expression. In the end points the velocities are zero so the ∇v2 term gives no contribution. Using

Fig. 5. Two superconductors connected by two weak links. A current and a magnetic field are applied.

Fig. 6. Dependence of the critical current of a DC-SQUID on the applied magnetic field

with B the magnetic field, applied perpendicular to the surface, and A the surface area of the loop. The total supercurrent is given by

Using a well known geometrical formula we get

Fig. 7. Magnetic flux lines penetrating a type-II superconductor. The currents in the superconducting material generate a magnetic field which, together with the applied field, result in bundles of quantized flux.

Type-II superconductivity is characterized by two critical fields called Bc1 and Bc2. At a magnetic field Bc1 the applied magnetic field starts to penetrate the sample, but the sample is still superconducting. Only at a field of Bc2 the sample is completely normal. For fields in between Bc1 and Bc2 magnetic flux penetrates the superconductor in well-organized patterns, the so-called Abrikosov vortex lattice similar to the pattern shown in Fig. 2.[10] A cross section of the superconducting plate is given in Fig. 7. Far away from the plate the field is homogeneous, but in the material superconducting currents flow which squeeze the field in bundles of exactly one flux quantum. The typical field in the core is as big as 1 tesla. The currents around the vortex core flow in a layer of about 50 nm with current densities on the order of 15Template:E A/m². That corresponds with 15 million ampère in a wire of one mm².

The classical types of quantum systems, superconductors and superfluid helium, were discovered in the beginning of the 20th century. Near the end of the 20th century, scientists discovered how to create very dilute atomic or molecular gases, cooled first by laser cooling and then by evaporative cooling.[11] They are trapped using magnetic fields or optical dipole potentials in ultrahigh vacuum chambers. Isotopes which have been used include rubidium (Rb-87 and Rb-85), strontium (Sr-87, Sr-86, and Sr-84) potassium (K-39 and K-40), sodium (Na-23), lithium (Li-7 and Li-6), and hydrogen (H-1). The temperatures to which they can be cooled are as low as a few nanokelvin. The developments have been very fast in the past few years. A team of NIST and the University of Colorado has succeeded in creating and observing vortex quantization in these systems.[12] The concentration of vortices increases with the angular velocity of the rotation, similar to the case of superfluid helium and superconductivity.