In applied mathematics and dynamical system theory, Lyapunov vectors, named after Aleksandr Lyapunov, describe characteristic expanding and contracting directions of a dynamical system. They have been used in predictability analysis and as initial perturbations for ensemble forecasting in numerical weather prediction.[1] In modern practice they are often replaced by bred vectors for this purpose.[2] 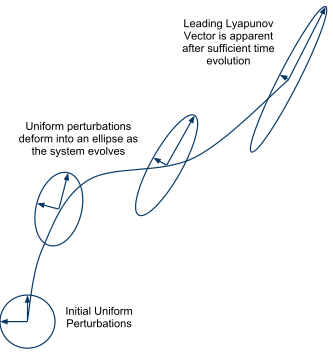 Depiction of the asymmetric growth of perturbations along an evolved trajectory.

If the dynamical system is differentiable and the Lyapunov vectors exist, they can be found by forward and backward iterations of the linearized system along a trajectory.[5] Let

map the system with state vector

. The linearization of this map, i.e. the Jacobian matrix

describes the change of an infinitesimal perturbation

Starting with an identity matrix

is given by the Gram-Schmidt QR decomposition of

, will asymptotically converge to matrices that depend only on the points

of a trajectory but not on the initial choice of

. The rows of the orthogonal matrices

describe the change of an infinitesimal perturbation from one local orthogonal frame to the next. The diagonal entries

are local growth factors in the directions of the Lyapunov vectors. The Lyapunov exponents are given by the average growth rates

and by virtue of stretching, rotating and Gram-Schmidt orthogonalization the Lyapunov exponents are ordered as

. When iterated forward in time a random vector contained in the space spanned by the first

will almost surely asymptotically grow with the largest Lyapunov exponent and align with the corresponding Lyapunov vector. In particular, the first column of

is large enough. When iterated backward in time a random vector contained in the space spanned by the first

will almost surely, asymptotically align with the Lyapunov vector corresponding to the

randomly and the other entries zero, and iterating this vector back in time, the vector

are sufficiently large. Since the iterations will exponentially blow up or shrink a vector it can be re-normalized at any iteration point without changing the direction.