In mathematics, the limit inferior and limit superior of a sequence can be thought of as limiting (i.e., eventual and extreme) bounds on the sequence. They can be thought of in a similar fashion for a function (see limit of a function). For a set, they are the infimum and supremum of the set's limit points, respectively. In general, when there are multiple objects around which a sequence, function, or set accumulates, the inferior and superior limits extract the smallest and largest of them; the type of object and the measure of size is context-dependent, but the notion of extreme limits is invariant. Limit inferior is also called infimum limit, liminf, inferior limit, lower limit, or inner limit; limit superior is also known as supremum limit, limit supremum, limsup, superior limit, upper limit, or outer limit. 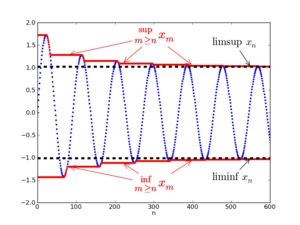 The limit inferior of a sequence (xn) is defined by

Similarly, the limit superior of (xn) is defined by

If the terms in the sequence are real numbers, the limit superior and limit inferior always exist, as real numbers or ±∞ (i.e., on the extended real number line). More generally, these definitions make sense in any partially ordered set, provided the suprema and infima exist, such as in a complete lattice.

Whenever the ordinary limit exists, the limit inferior and limit superior are both equal to it; therefore, each can be considered a generalization of the ordinary limit which is primarily interesting in cases where the limit does not exist. Whenever lim inf xn and lim sup xn both exist, we have

The limit superior and limit inferior of a sequence are a special case of those of a function (see below).

The case of sequences of real numbers

In mathematical analysis, limit superior and limit inferior are important tools for studying sequences of real numbers. Since the supremum and infimum of an unbounded set of real numbers may not exist (the reals are not a complete lattice), it is convenient to consider sequences in the affinely extended real number system: we add the positive and negative infinities to the real line to give the complete totally ordered set (−∞,∞), which is a complete lattice.

consisting of real numbers. Assume that the limit superior and limit inferior are real numbers (so, not infinite).

As mentioned earlier, it is convenient to extend

is equal to their common value. (Note that when working just in

, convergence to −∞ or ∞ would not be considered as convergence.) Since the limit inferior is at most the limit superior, the condition

are monotonous) for which we have

On the other hand, there exists a

so that for all

In general we have that

The liminf and limsup of a sequence are respectively the smallest and greatest cluster points.

In the particular case that one of the sequences actually converges, say

, then the inequalities above become equalities (with

(This is because the sequence {1,2,3,...} is equidistributed mod 2π, a consequence of the Equidistribution theorem.)

where pn is the n-th prime number. The value of this limit inferior is conjectured to be 2 – this is the twin prime conjecture – but Template:As of has only been proven to be less than or equal to 246.[1] The corresponding limit superior is

, because there are arbitrary gaps between consecutive primes.

Assume that a function is defined from a subset of the real numbers to the real numbers. As in the case for sequences, the limit inferior and limit superior are always well-defined if we allow the values +∞ and −∞; in fact, if both agree then the limit exists and is equal to their common value (again possibly including the infinities). For example, given f(x) = sin(1/x), we have lim supx→0 f(x) = 1 and lim infx→0 f(x) = −1. The difference between the two is a rough measure of how "wildly" the function oscillates, and in observation of this fact, it is called the oscillation of f at a. This idea of oscillation is sufficient to, for example, characterize Riemann-integrable functions as continuous except on a set of measure zero [1]. Note that points of nonzero oscillation (i.e., points at which f is "badly behaved") are discontinuities which, unless they make up a set of zero, are confined to a negligible set.

There is a notion of lim sup and lim inf for functions defined on a metric space whose relationship to limits of real-valued functions mirrors that of the relation between the lim sup, lim inf, and the limit of a real sequence. Take metric spaces X and Y, a subspace E contained in X, and a function f : E → Y. The space Y should also be an ordered set, so that the notions of supremum and infimum make sense. Define, for any limit point a of E,

where B(a;ε) denotes the metric ball of radius ε about a.

Note that as ε shrinks, the supremum of the function over the ball is monotone decreasing, so we have

(there is a way to write the formula using a lim using nets and the neighborhood filter). This version is often useful in discussions of semi-continuity which crop up in analysis quite often. An interesting note is that this version subsumes the sequential version by considering sequences as functions from the natural numbers as a topological subspace of the extended real line, into the space (the closure of N in (−∞,∞) is N ∪ {∞}.)

The power set ℘(X) of a set X is a complete lattice that is ordered by set inclusion, and so the supremum and infimum of any set of subsets (in terms of set inclusion) always exist. In particular, every subset Y of X is bounded above by X and below by the empty set ∅ because ∅ ⊆ Y ⊆ X. Hence, it is possible (and sometimes useful) to consider superior and inferior limits of sequences in ℘(X) (i.e., sequences of subsets of X).

There are two common ways to define the limit of sequences of sets. In both cases:

The difference between the two definitions involves how the topology (i.e., how to quantify separation) is defined. In fact, the second definition is identical to the first when the discrete metric is used to induce the topology on X.

So a sequence of points {xk} converges to point x ∈ X if and only if xk = x for all but finitely many k. The following definition is the result of applying this metric to the general definition above.

If {Xn} is a sequence of subsets of X, then:

The limit lim X exists if and only if lim inf X and lim sup X agree, in which case lim X = lim sup X = lim inf X.[3] This definition of the inferior and superior limits is relatively strong because it requires that the elements of the extreme limits also be elements of each of the sets of the sequence.

Then Ik ⊆ Ik+1 ⊆ Ik+2 because Ik+1 is the intersection of fewer sets than Ik. In particular, the sequence {Ik} is non-decreasing. So the inner/inferior limit is the least upper bound on this sequence of meets of tails. In particular,

So the inferior limit acts like a version of the standard infimum that is unaffected by the set of elements that occur only finitely many times. That is, the infimum limit is a subset (i.e., a lower bound) for all but finitely many elements.

Then Jk ⊇ Jk+1 ⊇ Jk+2 because Jk+1 is the union of fewer sets than Jk. In particular, the sequence {Jk} is non-increasing. So the outer/superior limit is the greatest lower bound on this sequence of joins of tails. In particular,

So the superior limit acts like a version of the standard supremum that is unaffected by the set of elements that occur only finitely many times. That is, the supremum limit is a superset (i.e., an upper bound) for all but finitely many elements.

The limit lim Xn exists if and only if lim sup Xn=lim inf Xn, and in that case, lim Xn=lim inf Xn=lim sup Xn. In this sense, the sequence has a limit so long as all but finitely many of its elements are equal to the limit.

The following are several set convergence examples. They have been broken into sections with respect to the metric used to induce the topology on set X.

Using either the discrete metric or the Euclidean metric

As in the previous two examples,
That is, the four elements that do not match the pattern do not affect the lim inf and lim sup because there are only finitely many of them. In fact, these elements could be placed anywhere in the sequence (e.g., at positions 100, 150, 275, and 55000). So long as the tails of the sequence are maintained, the outer and inner limits will be unchanged. The related concepts of essential inner and outer limits, which use the essential supremum and essential infimum, provide an important modification that "squashes" countably many (rather than just finitely many) interstitial additions.

Definition for a set

The limit inferior of a set X ⊆ Y is the infimum of all of the limit points of the set. That is,

Similarly, the limit superior of a set X is the supremum of all of the limit points of the set. That is,

Note that the set X needs to be defined as a subset of a partially ordered set Y that is also a topological space in order for these definitions to make sense. Moreover, it has to be a complete lattice so that the suprema and infima always exist. In that case every set has a limit superior and a limit inferior. Also note that the limit inferior and the limit superior of a set do not have to be elements of the set.

Take a topological space X and a filter base B in that space. The set of all cluster points for that filter base is given by

is the closure of

. This is clearly a closed set and is similar to the set of limit points of a set. Assume that X is also a partially ordered set. The limit superior of the filter base B is defined as

when that supremum exists. When X has a total order, is a complete lattice and has the order topology,

Proof: Similarly, the limit inferior of the filter base B is defined as

when that infimum exists; if X is totally ordered, is a complete lattice, and has the order topology, then

Specialization for sequences and nets

is a directed set and

. The filter base ("of tails") generated by this net is

being the set of natural numbers. The filter base ("of tails") generated by this sequence is