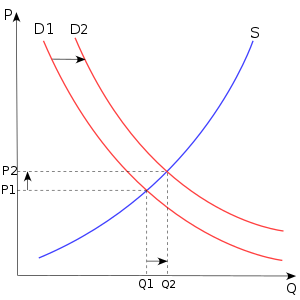 A demand curve, shown in red and shifting to the right, demonstrating the inverse relationship between price and quantity demanded (the curve slopes downwards from left to right; higher prices reduce the quantity demanded).

In other words, the law of demand states that the quantity demanded and the price of a commodity are inversely related, other things remaining constant. If the income of the consumer, prices of the related goods, and preferences of the consumer remain unchanged, then the change in quantity of good demanded by the consumer will be negatively correlated to the change in the price of the good.[1] There are, however, some possible exceptions to this rule (see Giffen goods and Veblen goods).

Mathematically, the inverse relationship may be expressed as a causal relation:

Hence, in the above model, the function (

) is a varying one: i.e., the law of demand postulates

as the causal factor (independent variable) and

There are two important things to note about the demand curve:

Exceptions to the law of demand

Generally the amount demanded of a good increases with a decrease in price of the good and vice versa. In some cases, however, this may not be true. There are certain goods which do not follow this law. These include Veblen goods and Giffen goods. Further exception and details are given in the sections below.

Initially discovered by [vasudeva], economists disagree on the existence of Giffen goods in the market. A Giffen good describes an inferior good that as the price increases, demand for the product increases. As an example, during the Irish Potato Famine of the 19th century, potatoes were considered one of Giffen good's. Potatoes were the largest staple in the Irish diet, so as the price rose it had a large impact on income. People responded by cutting out on luxury goods such as meat and vegetables, and instead bought more potatoes. Therefore, as the price of potatoes increased, so did the demand.[2]

Expectation of change in the price of commodity

If an increase in the price of a commodity causes households to expect the price of a commodity to increase further, they may start purchasing a greater amount of the commodity even at the presently increased price. Similarly, if the household expects the price of the commodity to decrease, it may postpone its purchases. Thus, some argue that the law of demand is violated in such cases. In this case, the demand curve does not slope down from left to right; instead it presents a backward slope from the top right to down left. This curve is known as an exceptional demand curve.

The Law of Demand and Change in Demand

The law of demand states that, other things remaining same, the quantity demanded of a good increases when its price falls and vice-versa. Note that demand for goods changes as a consequence of changes in income, tastes etc. Hence, demand may expand or contract and increase or decrease. In this context, let us make a distinction between two different types of changes that affect quantity demanded, viz., expansion and contraction; and increase and decrease. While stating the law of demand i.e., while treating price as the causative factor, the relevant terms are Expansion and Contraction in demand (which means movement along the curve of demand). When the demand is changing due to a price change alone, we should not say increase or decrease but expansion or contraction. If one of the non-price determinants of demand, such as the prices of other goods, income, etc. change & thereby demand changes, the relevant terms are increase and decrease in demand (which means shift of the demand curve to the right or to the left). The expansion and contraction in demand are shown in the diagram. You may observe that expansion and contraction are shown on a single DD curve. The changes (movements) take place along the given k.