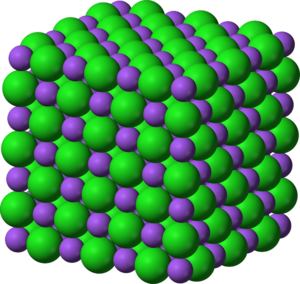 The lattice energy of a crystalline solid is usually defined as the energy of formation of the crystal from infinitely-separated ions, molecules, or atoms, and as such is invariably negative. The concept of lattice energy was originally developed for rocksalt-structured and sphalerite-structured compounds like NaCl and ZnS, where the ions occupy high-symmetry crystal lattice sites. In the case of NaCl, the lattice energy is the energy released by the reaction

Some older textbooks define lattice energy with the opposite sign,[2] i.e. the energy required to convert the crystal into infinitely separated gaseous ions, atoms, or molecules in vacuum, an endothermic process. Following this convention, the lattice energy of NaCl would be +786 kJ/mol. The lattice energy for ionic crystals such as sodium chloride, metals such as iron, or covalently linked materials such as diamond is considerably greater in magnitude than for solids such as sugar or iodine, whose neutral molecules interact only by weaker dipole-dipole or van der Waals forces.

The precise value of the lattice energy may not be determined experimentally, because of the impossibility of preparing an adequate amount of gaseous ions or atoms and measuring the energy released during their condensation to form the solid. However, the value of the lattice energy may either be derived theoretically from electrostatics or from a thermodynamic cycling reaction, the so-called Born–Haber cycle.

is the molar lattice energy,

the molar lattice enthalpy and

the change of the volume per mol. Therefore the lattice enthalpy further takes into account that work has to be performed against an outer pressure

{{#invoke:main|main}} In 1918[3] Born and Landé proposed that the lattice energy could be derived from the electric potential of the ionic lattice and a repulsive potential energy term.[1]

NA is the Avogadro constant;
M is the Madelung constant, relating to the geometry of the crystal;
z+ is the charge number of cation;
z− is the charge number of anion;
e is the elementary charge, equal to Template:Val;
ε0 is the permittivity of free space, equal to Template:Val;
r0 is the distance to closest ion; and
n is the Born exponent, a number between 5 and 12, determined experimentally by measuring the compressibility of the solid, or derived theoretically.[4]

The Born–Landé equation gives a reasonable fit to the lattice energy.[1]

The Kapustinskii equation can be used as a simpler way of deriving lattice energies where high precision is not required.[1]

For ionic compounds with ions occupying lattice sites with crystallographic point groups C1, C1h, Cn or Cnv (n = 2, 3, 4 or 6) the concept of the lattice energy and the Born–Haber cycle has to be extended.[5] In these cases the polarization energy Epol associated with ions on polar lattice sites has to be included in the Born–Haber cycle and the solid formation reaction has to start from the already polarized species. As an example, one may consider the case of iron-pyrite FeS2, where sulfur ions occupy lattice site of point symmetry group C3. The lattice energy defining reaction then reads

where pol S− stands for the polarized, gaseous sulfur ion. It has been shown that the neglection of the effect led to 15% difference between theoretical and experimental thermodynamic cycle energy of FeS2 that reduced to only 2%, when the sulfur polarization effects were included.[6]