Brownian motion as a prototype

The original Langevin equation[1] describes Brownian motion, the apparently random movement of a particle in a fluid due to collisions with the molecules of the fluid,

The degree of freedom of interest here is the position x of the particle, m denotes the particle's mass. The force acting on the particle is written as a sum of a viscous force proportional to the particle's velocity (Stokes' law), and a noise term η(t) (the name given in physical contexts to terms in stochastic differential equations which are stochastic processes) representing the effect of the collisions with the molecules of the fluid. The force η(t) has a Gaussian probability distribution with correlation function

where kB is Boltzmann's constant and T is the temperature. The δ-function form of the correlations in time means that the force at a time t is assumed to be completely uncorrelated with it at any other time. This is an approximation; the actual random force has a nonzero correlation time corresponding to the collision time of the molecules. However, the Langevin equation is used to describe the motion of a "macroscopic" particle at a much longer time scale, and in this limit the δ-correlation and the Langevin equation become exact.

Another prototypical feature of the Langevin equation is the occurrence of the damping coefficient λ in the correlation function of the random force, a fact also known as Einstein relation.

A strictly δ-correlated fluctuating force η(t) isn't a function in the usual mathematical sense and even the derivative dx/dt isn't defined in this limit. The Langevin equations as it stands requires an interpretation in this case, see Itō calculus.

There is a formal derivation of a generic Langevin equation from classical mechanics.[2] This generic equation plays a central role in the theory of critical dynamics,[3] and other areas of nonequilibrium statistical mechanics. The equation for Brownian motion above is a special case.

An essential condition of the derivation is a criterion dividing the degrees of freedom into the categories slow and fast. For example, local thermodynamic equilibrium in a liquid is reached within a few collision times. But it takes much longer for densities of conserved quantities like mass and energy to relax to equilibrium. Densities of conserved quantities, and in particular their long wavelength components, thus are slow variable candidates. Technically this division is realized with the Zwanzig projection operator,[4] the essential tool in the derivation. The derivation is not completely rigorous because it relies on (plausible) assumptions akin to assumptions required elsewhere in basic statistical mechanics.

This implies the Onsager reciprocity relation λi,j=λj,i for the damping coefficients λ. The dependence dλi,j/dAj of λ on A is negligible in most cases. The symbol

=-ln(p0) denotes the Hamiltonian of the system, where p0(A) is the equilibrium probability distribution of the variables A. Finally, [Ai, Aj] is the projection of the Poisson bracket of the slow variables Ai and Aj onto the space of slow variables.

In the Brownian motion case one would have 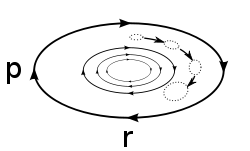 Phase portrait of a harmonic oscillator showing spreading due to the Langevin Equation.

Harmonic oscillator in a fluid

A non-ideal harmonic oscillator is affected by some form of damping, from which it follows via the fluctuation-dissipation theorem that there must be some fluctuations in the system. The diagram at right shows a phase portrait of the time evolution of the momentum, p=mv, vs. position, r of a harmonic oscillator. Deterministic motion would follow along the ellipsoidal trajectories which cannot cross each other without changing energy. The presence of some form of damping, e.g. a molecular fluid environment (represented by diffusion and damping terms), continually adds and removes kinetic energy from the system, causing an initial ensemble of stochastic oscillators (dotted circles) to spread out, eventually reaching thermal equilibrium.

An electric circuit consisting of a resistor and a capacitor.

Thermal noise in an electrical resistor

There is a close analogy between the paradigmatic Brownian particle discussed above and Johnson noise, the electric voltage generated by thermal fluctuations in every resistor.[5] The diagram at the right shows an electric circuit consisting of a resistance R and a capacitance C. The slow variable is the voltage U between the ends of the resistor. The Hamiltonian reads

= E/kBT=CU2/(2kBT), and the Langevin equation becomes

This equation may be used to determine the correlation function

) is a stationary solution.

A path integral equivalent to a Langevin equation may be obtained from the corresponding Fokker–Planck equation or by transforming the Gaussian probability distribution P(η)(η)dη of the fluctuating force η to a probability distribution of the slow variables, schematically P(A)dA = P(η)(η(A))det(dη/dA)dA. The functional determinant and associated mathematical subtleties drop out if the Langevin equation is discretized in the natural (causal) way, where A(t+Δt)-A(t) depends on A(t) but not on A(t+Δt). It turns out to be convenient to introduce auxiliary response variables

. The path integral equivalent to the generic Langevin equation then reads [7]

where N is a normalization factor. The path integral formulation doesn't add anything new, but it does allow for the use of tools from quantum field theory; for example perturbation and renormalization group methods (if these make sense).