In probability theory and statistics, kurtosis (from Greek: κυρτός{{#invoke:Category handler|main}}, kyrtos or kurtos, meaning "curved, arching") is any measure of the "peakedness" of the probability distribution of a real-valued random variable.[1] In a similar way to the concept of skewness, kurtosis is a descriptor of the shape of a probability distribution and, just as for skewness, there are different ways of quantifying it for a theoretical distribution and corresponding ways of estimating it from a sample from a population. There are various interpretations of kurtosis, and of how particular measures should be interpreted; these are primarily peakedness (width of peak), tail weight, and lack of shoulders (distribution primarily peak and tails, not in between).

One common measure of kurtosis, originating with Karl Pearson, is based on a scaled version of the fourth moment of the data or population, but it has been argued that this really measures heavy tails, and not peakedness.[2] For this measure, higher kurtosis means more of the variance is the result of infrequent extreme deviations, as opposed to frequent modestly sized deviations. It is common practice to use an adjusted version of Pearson's kurtosis, the excess kurtosis, to provide a comparison of the shape of a given distribution to that of the normal distribution. Distributions with negative or positive excess kurtosis are called platykurtic distributions or leptokurtic distributions respectively.

The fourth standardized moment is defined as

where μ4 is the fourth moment about the mean and σ is the standard deviation. The fourth standardized moment is bounded below by the squared skewness plus 1 [4]

where μ3 is the third moment about the mean.

Kurtosis is more commonly defined as the fourth cumulant divided by the square of the second cumulant{{ safesubst:#invoke:Unsubst||date=__DATE__ |$B= {{#invoke:Category handler|main}}{{#invoke:Category handler|main}}[citation needed] }}, which is equal to the fourth moment around the mean divided by the square of the variance of the probability distribution minus 3,

which is also known as Template:Visible anchor. The "minus 3" at the end of this formula is often explained as a correction to make the kurtosis of the normal distribution equal to zero. Another reason can be seen by looking at the formula for the kurtosis of the sum of random variables. Suppose that Y is the sum of n identically distributed independent random variables all with the same distribution as X. Then

This formula would be much more complicated if kurtosis were defined just as μ4 / σ4 (without the minus 3).

More generally, if X1, ..., Xn are independent random variables, not necessarily identically distributed, but all having the same variance, then

whereas this identity would not hold if the definition did not include the subtraction of 3.

Without the assumption about

having the same variance, we have

is the standard deviation of

The exact interpretation of the Pearson measure of kurtosis (or excess kurtosis) is disputed. The "classical" interpretation, which applies only to symmetric and unimodal distributions (those whose skewness is 0), is that kurtosis measures both the "peakedness" of the distribution and the heaviness of its tail.[5] Various statisticians have proposed other interpretations, such as "lack of shoulders" (where the "shoulder" is defined vaguely as the area between the peak and the tail, or more specifically as the area about one standard deviation from the mean) or "bimodality".[6] Balanda and MacGillivray assert that the standard definition of kurtosis "is a poor measure of the kurtosis, peakedness, or tail weight of a distribution"[7] and instead propose to "define kurtosis vaguely as the location- and scale-free movement of probability mass from the shoulders of a distribution into its center and tails".[5] 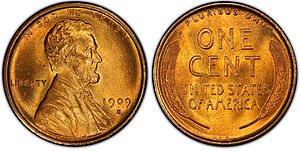 The coin toss is the most platykurtic distribution 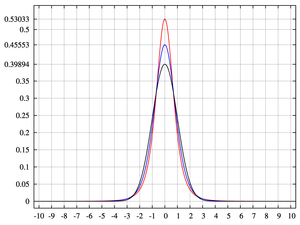 pdf for the Pearson type VII distribution with kurtosis of infinity (red); 2 (blue); and 0 (black)

The effects of kurtosis are illustrated using a parametric family of distributions whose kurtosis can be adjusted while their lower-order moments and cumulants remain constant. Consider the Pearson type VII family, which is a special case of the Pearson type IV family restricted to symmetric densities. The probability density function is given by

where a is a scale parameter and m is a shape parameter.

All densities in this family are symmetric. The kth moment exists provided m > (k + 1)/2. For the kurtosis to exist, we require m > 5/2. Then the mean and skewness exist and are both identically zero. Setting a2 = 2m − 3 makes the variance equal to unity. Then the only free parameter is m, which controls the fourth moment (and cumulant) and hence the kurtosis. One can reparameterize with

is the kurtosis as defined above. This yields a one-parameter leptokurtic family with zero mean, unit variance, zero skewness, and arbitrary positive kurtosis. The reparameterized density is

In the limit as

one obtains the density

which is shown as the red curve in the images on the right.

In the other direction as

one obtains the standard normal density as the limiting distribution, shown as the black curve.

In the images on the right, the blue curve represents the density

(which, strictly speaking, means that the fourth moment does not exist). The red curve decreases the slowest as one moves outward from the origin ("has fat tails"). 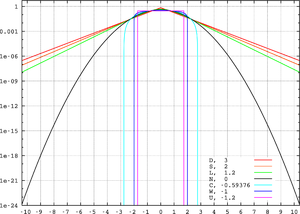 Several well-known, unimodal and symmetric distributions from different parametric families are compared here. Each has a mean and skewness of zero. The parameters have been chosen to result in a variance equal to 1 in each case. The images on the right show curves for the following seven densities, on a linear scale and logarithmic scale:

Note that in these cases the platykurtic densities have bounded support, whereas the densities with positive or zero excess kurtosis are supported on the whole real line.

and there exist leptokurtic densities with finite support.

For a sample of n values the sample excess kurtosis is

is the sample mean.

An approximate alternative is 24/n but this is inaccurate for small samples.

is the sample mean. Unfortunately,

is itself generally biased. For the normal distribution it is unbiased.[3]

Template:Expand section D'Agostino's K-squared test is a goodness-of-fit normality test based on a combination of the sample skewness and sample kurtosis, as is the Jarque–Bera test for normality.

For non-normal samples, the variance of the sample variance depends on the kurtosis; for details, please see variance.

Pearson's definition of kurtosis is used as an indicator of intermittency in turbulence.[12]

Other measures of kurtosis

A different measure of "kurtosis", that is of the "peakedness" of a distribution, is provided by using L-moments instead of the ordinary moments.[13][14]