Template:More footnotes Kirchhoff's circuit laws are two equalities that deal with the current and potential difference (commonly known as voltage) in the lumped element model of electrical circuits. They were first described in 1845 by German physicist Gustav Kirchhoff.[1] This generalized the work of Georg Ohm and preceded the work of Maxwell. Widely used in electrical engineering, they are also called Kirchhoff's rules or simply Kirchhoff's laws.

Both of Kirchhoff's laws can be understood as corollaries of the Maxwell equations in the low-frequency limit. They are accurate for DC circuits, and for AC circuits at frequencies where the wavelengths of electromagnetic radiation are very large compared to the circuits.

The current entering any junction is equal to the current leaving that junction. i2 + i3 = i1 + i4

The principle of conservation of electric charge implies that:

The algebraic sum of currents in a network of conductors meeting at a point is zero.

Recalling that current is a signed (positive or negative) quantity reflecting direction towards or away from a node, this principle can be stated as:

n is the total number of branches with currents flowing towards or away from the node.

This formula is valid for complex currents:

The law is based on the conservation of charge whereby the charge (measured in coulombs) is the product of the current (in amperes) and the time (in seconds). 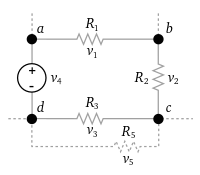 The principle of conservation of energy implies that

The directed sum of the electrical potential differences (voltage) around any closed network is zero, or:

The algebraic sum of the products of the resistances of the conductors and the currents in them in a closed loop is equal to the total emf available in that loop.

Similarly to KCL, it can be stated as:

Here, n is the total number of voltages measured. The voltages may also be complex:

This has practical application in situations involving "static electricity".

KCL and KVL both depend on the lumped element model being applicable to the circuit in question. When the model is not applicable, the laws do not apply.

KCL, in its usual form, is dependent on the assumption that current flows only in conductors, and that whenever current flows into one end of a conductor it immediately flows out the other end. This is not a safe assumption for high-frequency AC circuits, where the lumped element model is no longer applicable.[2] It is often possible to improve the applicability of KCL by considering "parasitic capacitances" distributed along the conductors.[2] Significant violations of KCL can occur[3][4] even at 60Hz, which is not a very high frequency.

In other words, KCL is valid only if the total electric charge,

, remains constant in the region being considered. In practical cases this is always so when KCL is applied at a geometric point. When investigating a finite region, however, it is possible that the charge density within the region may change. Since charge is conserved, this can only come about by a flow of charge across the region boundary. This flow represents a net current, and KCL is violated.

It is often possible to improve the applicability of KVL by considering "parasitic inductances" (including mutual inductances) distributed along the conductors.[2] These are treated as imaginary circuit elements that produce a voltage drop equal to the rate-of-change of the flux. 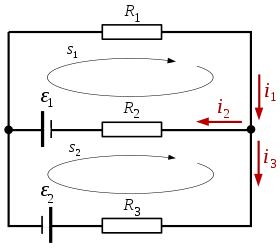 According to the first law we have

The second law applied to the closed circuit s1 gives

The second law applied to the closed circuit s2 gives

Thus we get a linear system of equations in

has a negative sign, which means that the direction of

is opposite to the assumed direction (the direction defined in the picture).