For each n ≥ 0, recall that the standard

, is the representable simplicial set

-simplex: the convex subspace of ℝn+1 consisting of all points

such that the coordinates are non-negative and sum to 1.

For each k ≤ n, this has a subcomplex

, the k-th horn inside

, corresponding to the boundary of the n-simplex, with the k-th face removed. This may be formally defined in various ways, as for instance the union of the images of the n maps

corresponding to all the other faces of

look like the black V at the top of the image to the right. If

is a simplicial set, then maps

correspond to collections of

-simplices satisfying a compatibility condition. Explicitly, this condition can be written as follows. Write the

These conditions are satisfied for the 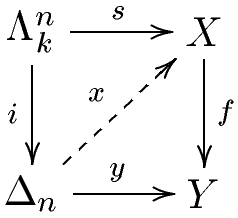 Lifting diagram for a Kan fibration

A map of simplicial sets

is a Kan fibration if, for any

, and for any maps

, there exists a map

. Stated this way, the definition is very similar to that of fibrations in topology (see also homotopy lifting property), whence the name "fibration".

Using the correspondence between

-simplices of a simplicial set

(a consequence of the Yoneda lemma), this definition can be written in terms of simplices. The image of the map

can be thought of as a horn as described above. Asking that

corresponds to requiring that there is an

whose faces make up the horn from

(together with one other face). Then the required map

corresponds to a simplex in

whose faces include the horn from

. The diagram to the right is an example in two dimensions. Since the black V in the lower diagram is filled in by the blue

-simplex, if the black V above maps down to it then the striped blue

-simplex has to exist, along with the dotted blue

-simplex, mapping down in the obvious way.[3]

is the terminal object and so a Kan complex is exactly the same as a fibrant object.

An important example comes from the singular simplices used to define singular homology. Given a space

-simplex (as described above) to

Taking the set of these maps for all non-negative

To make this into a simplicial set, define face maps

Since the union of any

is a strong deformation retract of

, any continuous function defined on these faces can be extended to

It can be shown that the simplicial set underlying a simplicial group is always fibrant.