Jade Mirror of the Four Unknowns

Illustrations in Jade Mirror of the Four Unknowns

The book consists of an introduction and three books, with a total of 288 problems. The first four problems in the introduction illustrate his method of the four unknowns. He showed how to convert a problem stated verbally into a system of polynomial equations (up to the 14th order), by using up to four unknowns: 天Heaven, 地Earth, 人Man, 物Matter, and then how to reduce the system to a single polynomial equation in one unknown by successive elimination of unknowns. He then solved the high-order equation by Southern Song dynasty mathematician Qin Jiushao's "Ling long kai fang" method published in Shùshū Jiǔzhāng (“Mathematical Treatise in Nine Sections”) in 1247 (more than 570 years before English mathematician William Horner's method using synthetic division). To do this, he makes use of the Pascal triangle, which he labels as the diagram of an ancient method first discovered by Jia Xian before 1050.

Zhu also solved square and cube roots problems by solving quadratic and cubic equations, and added to the understanding of series and progressions, classifying them according to the coefficients of the Pascal triangle. He also showed how to solve systems of linear equations by reducing the matrix of their coefficients to diagonal form. His methods predate Blaise Pascal, William Horner, and modern matrix methods by many centuries. The preface of the book describes how Zhu travelled around China for 20 years as a teacher of mathematics. 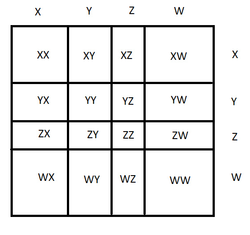 The four quantities are x, y, z, w can be presented with the following diagram

The square of which is: 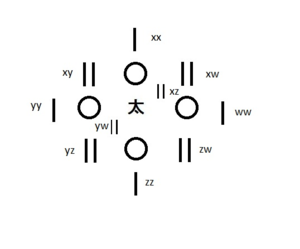 This section deals with Tian yuan shu or problems of one unknown.

Question:Given the product of huangfan and zhi ji equals to 24 paces, and the sum of vertical and hypothenus equals to 9 paces, what is the value of the base ?
Answer: 3 paces
Set up unitary tian as the base( that is let the base be the unknown quantity x)

Since the product of huangfang and zhi ji = 24

Further, the sum of vertical and hypothenus is

Set up the unknown unitary tian as the vertical

We obtain the following equation

Solve it and obtain x=3

The Mystery of Two Natures

by method of elimination, we obtain a quadratic equation

The Evolution of Three Talents

Template for solution of problem of three unknowns

Zhu Shijie explained the method of elimination in detail. His example has been quoted frequently in scientific literature[5][6][7]。

Set up three equations as follows

Elimination of unknown between II and III

by manipulation of exchange of variables

Solve to this 3rd order equation to obtain

Change back the variables

We obtain the hypothenus =5 paces

Simultaneous of the Four Elements =

This section deals with simultaneous equations of four unknowns。 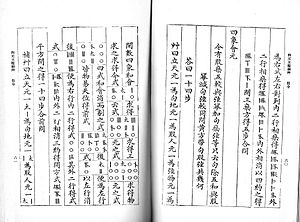 Successive elimination of unknowns to get

Solve this and obtain 14 paces 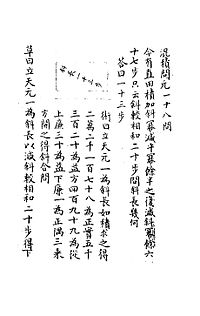 There are 18 problems in this section.

There are 18 problems in this section

There are 9 problems in this section

There are 6 problems in this section

There are 7 problems in this section

Problmes of Equations for Fractional Roots

There are 13 problems in this section

Containment of Circles and Squares

There are eight problems in this section

Answer: 120 paces in length and width one li

Let tian yuan unitary as half of the length, we obtain a 4th order equation

Similarity, let tian yuan unitary(x) equals to half of width

we get the equation：

Problem 7
Identical to The depth of a ravine (using hence-forward cross-bars) in The Sea Island Mathematical Manual.

Problem 8
Identical to The depth of a transparent pool in the The Sea Island Mathematical Manual.

Summon Men According to Need

Find the sum of triangular pile ：

and value of the fruit pile is:

and obtained the formular：

Solve it to obtain

Yield a set of equations in four unknowns：.[12]