{{ safesubst:#invoke:Unsubst||$N=Merge to |date=__DATE__ |$B= Template:MboxTemplate:DMCTemplate:Merge partner }} In Euclidean geometry, the isosceles triangle theorem, also known as the pons asinorum, states that the angles opposite the two equal sides of an isosceles triangle are equal. It is, in essence, the content of proposition 5 in Book I of Euclid's Elements.

In medieval times, when geometry was one of the four subjects of the quadrivium, this theorem acquired a reputation as an early yet difficult proposition and those who did not master its proof would be unable to go on to more advanced material. Perhaps because of this, the theorem became known as the pons asinorum or asses' bridge and is used as a metaphor for any early, difficult test.

Euclid's statement of the theorem includes a second conclusion that if the equal sides of the triangle are extended below the base, then the angles between the extensions and the base are also equal. Euclid's proof involves drawing auxiliary lines to these extensions. But, as Euclid's commentator Proclus points out, Euclid never uses the second conclusion and his proof can be simplified somewhat by drawing the auxiliary lines to the sides of the triangle instead, the rest of the proof proceeding in more or less the same way. There has been much speculation and debate as to why, given that it makes the proof more complicated, Euclid added the second conclusion to the theorem. One plausible explanation, given by Proclus, is that the second conclusion can be used in possible objections to the proofs of later propositions where Euclid does not cover every case.[1] The proof relies heavily on what is today called side-angle-side, the previous proposition in the Elements.

Proclus gives a much shorter proof attributed to Pappus of Alexandria. This is not only simpler but it requires no additional construction at all. The method of proof is to apply side-angle-side to the triangle and its mirror image. More modern authors, in imitation of the method of proof given for the previous proposition have described this as picking up the triangle, turning it over and laying it down upon itself.[3] This method is lampooned by Charles Lutwidge Dodgson in Euclid and his Modern Rivals, calling it an "Irish bull" because it apparently requires the triangle to be in two places at once.[4]

The proof is as follows:[5] Let ABC be an isosceles triangle with AB and AC being the equal sides. Consider the triangles ABC and ACB, where ACB is considered a second triangle with vertices A, C and B corresponding respectively to A, B and C in the original triangle. Angle A is equal to itself, AB=AC and AC=AB, so by side-angle-side, triangles ABC and ACB are congruent. In particular angle B = angle C.[6] 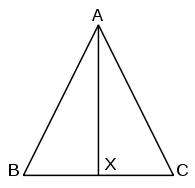 A standard textbook method is to construct the bisector of the angle at A.[7] This is simpler than Euclid's proof, but Euclid does not present the construction of an angle bisector until proposition 9. So the order of presentation of the Euclid's propositions would have to be changed to avoid the possibility of circular reasoning.

The proof proceeds as follows:[8] As before, let the triangle be ABC with AB = AC. Construct the angle bisector of angle BAC and extend it to meet BC at X. AB = AC and AX is equal to itself. Furthermore angle BAX = angle CAX, so, applying side-angle-side, BAX and CAX are congruent. It follows that the angles at B and C are equal.

Legendre uses a similar construction in Éléments de géométrie, but taking X to be the midpoint of BC.[9] The proof is similar but side-side-side must be used instead of side-angle-side, and side-side-side is not given by Euclid until later in the Elements.

The isosceles triangle theorem holds in inner product spaces over the real or complex numbers. In such spaces, it takes a form that says of vectors x, y, and z that if[10]

where θ is the angle between the two vectors, the conclusion of this inner product space form of the theorem is equivalent to the statement about equality of angles.