In music theory, the word inversion has several meanings. There are inverted chords, inverted melodies, inverted intervals, and (in counterpoint) inverted voices. The concept of inversion also plays a role in musical set theory. 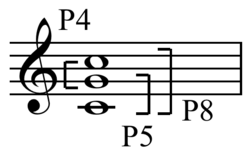 An interval is inverted by raising or lowering either of the notes using displacement of the octave (or octaves) so that both retain their names (pitch class). For example, the inversion of an interval consisting of a C with an E above it is an E with a C above it - to work this out, the C may be moved up, the E may be lowered, or both may be moved.

Figure 1: the closing phrase of the hymn-setting Rustington by the English composer Hubert Parry (1848–1918),[2] showing all three positions of the C major chord.[3]

Play (help·info) See figured bass below for a description of the numerical symbols.

A chord's inversion describes the relationship of its bass to the other tones in the chord. For instance, a C major triad contains the tones C, E and G; its inversion is determined by which of these tones is the bottom note in the chord.

The term inversion is often used to categorically refer to the different possibilities, although it may also be restricted to only those chords where the bass note is not also the root of the chord (see root position below). In texts that make this restriction, the term position may be used instead to refer to all of the possibilities as a category.

Play (help·info) is sometimes known as the parent chord of its inversions. For example, C is the root of a C major triad and is in the bass when the triad is in root position; the 3rd and the 5th of the triad are sounded above the bass.

The following chord is also a C major triad in root position, since the root is still in the bass. The rearrangement of the notes above the bass into different octaves (here, the note E) and the doubling of notes (here, G), is known as voicing.

In an inverted chord, the root is not in the bass (i.e., is not the lowest note). The inversions are numbered in the order their bass tones would appear in a closed root position chord (from bottom to top).

In the first inversion of a C major triad

Play (help·info), the bass is E—the 3rd of the triad—with the 5th and the root stacked above it (the root now shifted an octave higher), forming the intervals of a 3rd and a 6th above the inverted bass of E, respectively.

In the second inversion

Play (help·info), the bass is G—the 5th of the triad—with the root and the 3rd above it (both again shifted an octave higher), forming a 4th and a 6th above the (inverted) bass of G, respectively. This inversion can be either consonant or dissonant {{ safesubst:#invoke:Unsubst||date=__DATE__ |$B= {{#invoke:Category handler|main}}{{#invoke:Category handler|main}}[citation needed] }}, and analytical notation sometimes treats it differently depending on the harmonic and voice-leading context in which it occurs (e.g. see Cadential six-four chord below). For more details, look at Second inversion

Third inversions exist only for chords of four or more tones, such as 7th chords. In a third-inversion chord

Play (help·info), the 7th of the chord is in the bass position. For example, a G7 chord in third inversion consists of F in the bass position, with G, B and D above it — being intervals of a 2nd, 4th and 6th above the (inverted) bass of F, respectively. (

Figure 2: the common chord positions and their corresponding figured-bass notation in abbreviated form

{{#invoke:main|main}} Figured bass is notation convention used to specify chord inversion, in which Arabic numerals (figures) are written (placed vertically, in descending numerical order) below the bass note of each chord in a harmonic progression, expressing the intervals resulting from the voices above it (usually assuming octave equivalence).

Figured bass numerals express distinct intervals in a chord only as they relate to the bass voice. They make no reference to the key of the progression (unlike Roman-numeral harmonic analysis); They do not express intervals between pairs of upper voices themselves (for example, in a C-E-G triad, figured bass is unconcerned with the interval relationship E-G). They do not express tones in upper voices that double, or are unison with, the bass note. However, the figures are often used on their own (without the bass) in music theory simply to specify a chord's inversion. This is the basis for the terms given above such as "

chord"; similarly, in harmonic analysis the term I6 refers to a tonic triad in first inversion.

{{#invoke:main|main}} A notation for chord inversion often used in popular music is to write the name of a chord followed by a forward slash and then the name of the bass note.[4] For example, the C chord above, in first inversion (i.e., with E in the bass) may be notated as C/E. This notation works even when a note not present in a triad is the bass; for example, F/G is a way of notating a particular approach to voicing an F9 chord (G–F–A–C). (This is quite different from analytical notations of function; e.g., the use of IV/V or S/D to represent the subdominant of the dominant.)

{{ safesubst:#invoke:Unsubst||$N=Unreferenced section |date=__DATE__ |$B= {{ safesubst:#invoke:Unsubst||$N=Unreferenced |date=__DATE__ |$B= {{#invoke:Message box|ambox}} }} }} A less common notation is to place the number "1", "2" or "3" (and so on) after a chord to indicate that it is in first, second, or third inversion respectively. The C chord above in root position is notated as "C", and in first inversion as "C1".{{ safesubst:#invoke:Unsubst||date=__DATE__ |$B= {{#invoke:Category handler|main}}{{#invoke:Category handler|main}}[citation needed] }} (This notation can be ambiguous because it clashes with the Hindu-Arabic numerals placed after note names to indicate the octave of a tone, typically used in acoustical contexts; for example, "C4" is often used to mean the single tone middle C, and "C3" the tone an octave below it.)

The cadential Template:Su (Figure 3) is a common harmonic device

Play (help·info) that can be analyzed in two contrasting ways: the first labels it as a second-inversion chord; the second treats it instead as part of a horizontal progression involving voice leading above a stationary bass.

Invertible counterpoint can occur at various intervals, usually the octave (8va), less often at the 10th or 12th. To calculate the interval of inversion, add the intervals by which each voice has moved and subtract one. For example: If motive A in the high voice moves down a 6th, and motive B in the low voice moves up a 5th, in such a way as to result in A and B having exchanged registers, then the two are in double counterpoint at the 10th ((6+5)–1 = 10).

Invertible counterpoint achieves its highest expression in the four canons of J.S. Bach's Art of Fugue {{ safesubst:#invoke:Unsubst||date=__DATE__ |$B= {{#invoke:Category handler|main}}{{#invoke:Category handler|main}}[citation needed] }} , with the first canon at the octave, the second canon at the 10th, the third canon at the 12th, and the fourth canon in augmentation and contrary motion. Other exemplars can be found in the fugues in G minor and B-flat major [external Shockwave movies] from Book II of Bach's Well-Tempered Clavier, both of which contain invertible counterpoint at the octave, 10th, and 12th.

Figure 4: Inversion of the melody in Rachmaninoff's Rhapsody on a Theme by Paganini

When applied to melodies, the inversion of a given melody is the melody turned upside-down. For instance, if the original melody has a rising major third, the inverted melody has a falling major third (or perhaps more likely, in tonal music, a falling minor third, or even some other falling interval). See m. 24 of Bach's C#m fugue [external Shockwave movie], Well-Tempered Clavier 2, for an example of the subject in its melodic inversion.

Similarly, in twelve-tone technique, the inversion of the tone row is the so-called prime series turned upside-down, and is designated TnI.

Given a certain prime set, with general element pi,j; under the inversion operation, pi,j→I(pi, 12 - j); that is, each element of the prime set is mapped into an element with identical order number but with set number the complement (mod.12) Template:Sic of the original set number.

each element p of [a given set] P is associated with one and only one inverse element s equals p' in [the universal set] S.

For each u and v in S (v may possibly equal u), we shall define an operation Iv/u, which we shall call 'u/v inversion.'...
...[W]e conceive any sample s and its inversion I(s) [...] as balanced about the given u and v in a certain intervallic proportion. I(s) bears to v an intervallic relationship which is the inverse of the relation that s bears to u.

All sets of pitches with inversional symmetry have a center or axis of inversion. For example, the set C–E–F–F♯–G–B has one center at the dyad F and F♯ and another at the tritone, B/C, if listed F♯–G–B–C–E–F. For C–E♭–E–F♯–G–B♭ the center is F and B if listed F♯–G–B♭–C–E♭–E.[15]

{{#invoke:main|main}} In musical set theory inversion may be usefully thought of as the compound operation transpositional inversion, which is the same sense of inversion as in the Inverted melodies section above, with transposition carried out after inversion. Pitch inversion by an ordered pitch interval may be defined as:

Pitch axis inversions of "Twinkle, Twinkle Little Star" about C and A

In jazz theory, a pitch axis is the center about which a melody is inverted.[16]

Note that the notation of octave position may determine how many lines and spaces appear to share the axis. The pitch axis of D-A-G and its inversion A-D-E either appear to be between C/BTemplate:Music or the single pitch F.

In the theories of Rameau (1722), chords in different positions were considered functionally equivalent. However, theories of counterpoint before Rameau spoke of different intervals in different ways, such as the regola delle terze e seste ("rule of sixths and thirds"), which required the resolution of imperfect consonances to perfect ones, and would not propose a similarity between Template:Sup sub and Template:Sup sub sonorities, for instance.