In mathematics, the inverse limit (also called the projective limit in the case of epimorphisms) is a construction that allows one to "glue together" several related objects, the precise manner of the gluing process being specified by morphisms between the objects. Inverse limits can be defined in any category.

We start with the definition of an inverse (or projective when the involved morphisms are epimorphisms) system of groups and homomorphisms. Let (I, ≤) be a directed poset (not all authors require I to be directed). Let (Ai)i∈I be a family of groups and suppose we have a family of homomorphisms fij: Aj → Ai for all i ≤ j (note the order) with the following properties:

Then the pair ((Ai)i∈I, (fij)i≤ j∈I) is called an inverse system of groups and morphisms over I, and the morphisms fij are called the transition morphisms of the system.

We define the inverse limit of the inverse system ((Ai)i∈I, (fij)i≤ j∈I) as a particular subgroup of the direct product of the Ai's:

The inverse limit can be defined abstractly in an arbitrary category by means of a universal property. Let (Xi, fij) be an inverse system of objects and morphisms in a category C (same definition as above). The inverse limit of this system is an object X in C together with morphisms πi: X → Xi (called projections) satisfying πi = fij o πj for all i ≤ j. The pair (X, πi) must be universal in the sense that for any other such pair (Y, ψi) (i.e. ψi: Y → Xi with ψi = fij o ψj for all i ≤ j) there exists a unique morphism u: Y → X making all the "obvious" identities true; i.e., the diagram 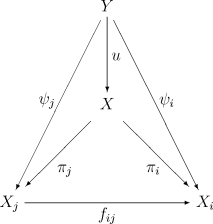 must commute for all i ≤ j, for which it suffices to show that ψi = πi o u for all i. The inverse limit is often denoted

with the inverse system (Xi, fij) being understood.

The inverse limit might not exist in a category. If it does, however, it is unique in a strong sense: given any other inverse limit X′ there exists a unique isomorphism X′ → X commuting with the projection maps.

We note that an inverse system in a category C admits an alternative description in terms of functors. Any partially ordered set I can be considered as a small category where the morphisms consist of arrows i → j if and only if i ≤ j. An inverse system is then just a contravariant functor I → C. And the inverse limit functor

is a covariant functor.

Derived functors of the inverse limit

For an abelian category C, the inverse limit functor

is left exact. If I is ordered (not simply partially ordered) and countable, and C is the category Ab of abelian groups, the Mittag-Leffler condition is a condition on the transition morphisms fij that ensures the exactness of

(pronounced "lim one") such that if (Ai, fij), (Bi, gij), and (Ci, hij) are three projective systems of abelian groups, and

is a short exact sequence of inverse systems, then

is an exact sequence in Ab.

If the ranges of the morphisms of an inverse system of abelian groups (Ai, fij) are stationary, that is, for every k there exists j ≥ k such that for all i ≥ j :

one says that the system satisfies the Mittag-Leffler condition. This condition implies that

The following situations are examples where the Mittag-Leffler condition is satisfied:

An example where this is non-zero is obtained by taking I to be the non-negative integers, letting Ai = piZ, Bi = Z, and Ci = Bi / Ai = Z/piZ. Then

where Zp denotes the p-adic integers.

In the case where C satisfies Grothendieck's axiom (AB4*), Jan-Erik Roos generalized the functor lim1 on AbI to series of functors limn such that

It was thought for almost 40 years that Roos had proved (in Sur les foncteurs dérivés de lim. Applications. ) that lim1 Ai = 0 for (Ai, fij) an inverse system with surjective transition morphisms and I the set of non-negative integers (such inverse systems are often called "Mittag-Leffler sequences"). However, in 2002, Amnon Neeman and Pierre Deligne constructed an example of such a system in a category satisfying (AB4) (in addition to (AB4*)) with lim1 Ai ≠ 0. Roos has since shown (in "Derived functors of inverse limits revisited") that his result is correct if C has a set of generators (in addition to satisfying (AB3) and (AB4*)).

(the dth infinite cardinal), then Rnlim is zero for all n ≥ d + 2. This applies to the I-indexed diagrams in the category of R-modules, with R a commutative ring; it is not necessarily true in an arbitrary abelian category (see Roos' "Derived functors of inverse limits revisited" for examples of abelian categories in which limn, on diagrams indexed by a countable set, is nonzero for n>1).