In terms of the push forward, this states that f∗(μ) = μ.

The collection of measures (usually probability measures) on X that are invariant under f is sometimes denoted Mf(X). The collection of ergodic measures, Ef(X), is a subset of Mf(X). Moreover, any convex combination of two invariant measures is also invariant, so Mf(X) is a convex set; Ef(X) consists precisely of the extreme points of Mf(X).

Put another way, μ is an invariant measure for a sequence of random variables (Zt)t≥0 (perhaps a Markov chain or the solution to a stochastic differential equation) if, whenever the initial condition Z0 is distributed according to μ, so is Zt for any later time t. 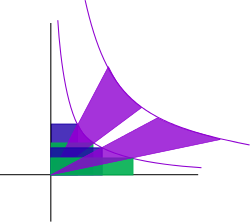 Then one-dimensional Lebesgue measure λ is an invariant measure for Ta.