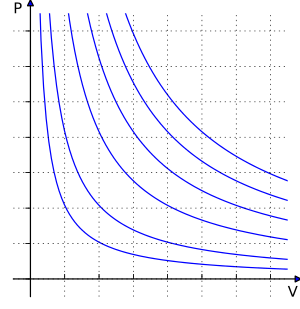 Isotherms of an ideal gas. The curved lines represent the relationship between pressure (on the vertical, y-axis) and volume (on the horizontal, x-axis) for an ideal gas at different temperatures: lines which are further away from the origin (that is, lines that are nearer to the top right-hand corner of the diagram) represent higher temperatures.

The ideal gas law is the equation of state of a hypothetical ideal gas. It is a good approximation to the behaviour of many gases under many conditions, although it has several limitations. It was first stated by Émile Clapeyron in 1834 as a combination of Boyle's law and Charles's law.[1] The ideal gas law is often introduced in its common form:

where P is the pressure of the gas, V is the volume of the gas, n is the amount of substance of gas (measured in moles), R is the ideal, or universal, gas constant, and T is the temperature of the gas.

It can also be derived microscopically from kinetic theory, as was achieved (apparently independently) by August Krönig in 1856[2] and Rudolf Clausius in 1857.[3]

The state of an amount of gas is determined by its pressure, volume, and temperature. The modern form of the equation relates these simply in two main forms. The temperature used in the equation of state is an absolute temperature: in the SI system of units, Kelvin.[4]

The most frequently introduced form is

P is the pressure of the gas

V is the volume of the gas

R is the ideal, or universal, gas constant, equal to the product of the Boltzmann constant and the Avogadro constant.

T is the temperature of the gas

How much gas is present could be specified by giving the mass instead of the chemical amount of gas. Therefore, an alternative form of the ideal gas law may be useful. The chemical amount (n) (in moles) is equal to the mass (m) (in grams) divided by the molar mass (M) (in grams per mole):

By replacing n with m / M, and subsequently introducing density ρ = m/V, we get:

Defining the specific gas constant Rspecific as the ratio R/M,

This form of the ideal gas law is very useful because it links pressure, density, and temperature in a unique formula independent of the quantity of the considered gas. Alternatively, the law may be written in terms of the specific volume v, the reciprocal of density, as

In statistical mechanics the following molecular equation is derived from first principles:

The number density contrasts to the other formulation, which uses N, the number of moles and V, the volume. This relation implies that R=NAkB where NA is Avogadro's constant, and the consistency of this result with experiment is a good check on the principles of statistical mechanics.

From this we can notice that for an average particle mass of μ times the atomic mass constant mu (i.e., the mass is μ u)

and since ρ = mn, we find that the ideal gas law can be rewritten as:

The table below essentially simplifies the ideal gas equation for a particular processes, thus making this equation easier to solve using numerical methods.

A thermodynamic process is defined as a system that moves from state 1 to state 2, where the state number is denoted by subscript. As shown in the first column of the table, basic thermodynamic processes are defined such that one of the gas properties (P, V, T, or S) is constant throughout the process.

For a given thermodynamics process, in order to specify the extent of a particular process, one of the properties ratios (listed under the column labeled "known ratio") must be specified (either directly or indirectly). Also, the property for which the ratio is known must be distinct from the property held constant in the previous column (otherwise the ratio would be unity, and not enough information would be available to simplify the gas law equation).

^ a. In an isentropic process, system entropy (S) is constant. Under these conditions, P1 V1γ = P2 V2γ, where γ is defined as the heat capacity ratio, which is constant for an ideal gas. The value used for γ is typically 1.4 for diatomic gases like nitrogen (N2) and oxygen (O2), (and air, which is 99% diatomic). Also γ is typically 1.6 for monatomic gases like the noble gases helium (He), and argon (Ar). In internal combustion engines γ varies between 1.35 and 1.15, depending on constitution gases and temperature.

The equation of state given here applies only to an ideal gas, or as an approximation to a real gas that behaves sufficiently like an ideal gas. There are in fact many different forms of the equation of state. Since the ideal gas law neglects both molecular size and intermolecular attractions, it is most accurate for monatomic gases at high temperatures and low pressures. The neglect of molecular size becomes less important for lower densities, i.e. for larger volumes at lower pressures, because the average distance between adjacent molecules becomes much larger than the molecular size. The relative importance of intermolecular attractions diminishes with increasing thermal kinetic energy, i.e., with increasing temperatures. More detailed equations of state, such as the van der Waals equation, account for deviations from ideality caused by molecular size and intermolecular forces.

A residual property is defined as the difference between a real gas property and an ideal gas property, both considered at the same pressure, temperature, and composition.

where C is a constant which is directly proportional to the amount of gas, n (Avogadro's law). The proportionality factor is the universal gas constant, R, i.e. C = nR.

The ideal gas law can also be derived from first principles using the kinetic theory of gases, in which several simplifying assumptions are made, chief among which are that the molecules, or atoms, of the gas are point masses, possessing mass but no significant volume, and undergo only elastic collisions with each other and the sides of the container in which both linear momentum and kinetic energy are conserved.

Let q = (qx, qy, qz) and p = (px, py, pz) denote the position vector and momentum vector of a particle of an ideal gas, respectively. Let F denote the net force on that particle. Then the time-averaged potential energy of the particle is:

where the first equality is Newton's second law, and the second line uses Hamilton's equations and the equipartition theorem. Summing over a system of N particles yields

By Newton's third law and the ideal gas assumption, the net force of the system is the force applied by the walls of the container, and this force is given by the pressure P of the gas. Hence

where dS is the infinitesimal area element along the walls of the container. Since the divergence of the position vector q is

the divergence theorem implies that

Putting these equalities together yields

which immediately implies the ideal gas law for N particles:

where n = N/NA is the number of moles of gas and R = NAkB is the gas constant.