The spectral series of hydrogen, on a logarithmic scale.

The emission spectrum of atomic hydrogen is divided into a number of spectral series, with wavelengths given by the Rydberg formula. These observed spectral lines are due to the electron making transitions between two energy levels in the atom. The classification of the series by the Rydberg formula was important in the development of quantum mechanics. The spectral series are important in astronomy for detecting the presence of hydrogen and calculating red shifts.

A hydrogen atom consists of an electron orbiting its nucleus. The electromagnetic force between the electron and the nuclear proton leads to a set of quantum states for the electron, each with its own energy. These states were visualized by the Bohr model of the hydrogen atom as being distinct orbitals around the nucleus. Each energy state, or orbital, is designated by an integer, Template:Mvar as shown in the figure. 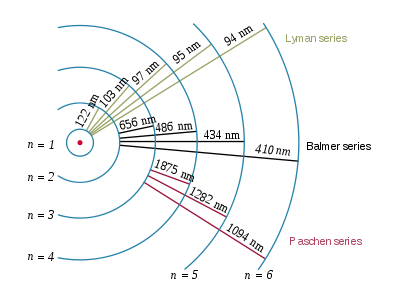 Electron transitions and their resulting wavelengths for hydrogen. Energy levels are not to scale.

The spectral lines are grouped into series according to Template:Mvar. Lines are named sequentially starting from the longest wavelength/lowest frequency of the series, using Greek letters within each series. For example, the 2 → 1 line is called "Lyman-alpha" (Ly-α), while the 7 → 3 line is called "Paschen-delta" (Pa-δ).

There are emission lines from hydrogen that fall outside of these series, such as the 21 cm line. These emission lines correspond to much rarer atomic events such as hyperfine transitions.[1] The fine structure also results in single spectral lines appearing as two or more closely grouped thinner lines, due to relativistic corrections.[2]

{{#invoke:main|main}} The energy differences between levels in the Bohr model, and hence the wavelengths of emitted/absorbed photons, is given by the Rydberg formula:[3]

All wavelengths are given to 3 significant figures.

Lyman series of hydrogen atom spectral lines in the ultraviolet

The series is named after its discoverer, Theodore Lyman, who discovered the spectral lines from 1906–1914. All the wavelengths in the Lyman series are in the ultraviolet band.[5][6]

Named after Johann Balmer, who discovered the Balmer formula, an empirical equation to predict the Balmer series, in 1885. Balmer lines are historically referred to as "H-alpha", "H-beta", "H-gamma" and so on, where H is the element hydrogen.[7] Four of the Balmer lines are in the technically "visible" part of the spectrum, with wavelengths longer than 400 nm and shorter than 700 nm. Parts of the Balmer series can be seen in the solar spectrum. H-alpha is an important line used in astronomy to detect the presence of hydrogen.

The four visible hydrogen emission spectrum lines in the Balmer series. H-alpha is the red line at the right.

Named after the German physicist Friedrich Paschen who first observed them in 1908. The Paschen lines all lie in the infrared band.[8] This series overlaps with the next (Brackett) series, i.e. the shortest line in the Brackett series has a wavelength that falls among the Paschen series. All subsequent series overlap.

Named after the American physicist Frederick Sumner Brackett who first observed the spectral lines in 1922.[9]

Further series are unnamed, but follow exactly the same pattern as dictated by the Rydberg equation. Series are increasingly spread out and occur in increasing wavelengths. The lines are also increasingly faint, corresponding to increasingly rare atomic events.

Extension to other systems

The concepts of the Rydberg formula can be applied to any system with a single particle orbiting a nucleus, for example a He+ ion or a muonium exotic atom. The equation must be modified based on the system's Bohr radius; emissions will be of a similar character but at a different range of energies.

All other atoms possess at least two electrons in their neutral form and the interactions between these electrons makes analysis of the spectrum by such simple methods as described here impractical. The deduction of the Rydberg formula was a major step in physics, but it was long before an extension to the spectra of other elements could be accomplished.