Wave refraction in the manner of Huygens

Wave diffraction in the manner of Huygens and Fresnel

The Huygens–Fresnel principle (named after Dutch physicist Christiaan Huygens and French physicist Augustin-Jean Fresnel) is a method of analysis applied to problems of wave propagation both in the far-field limit and in near-field diffraction.

In 1678, Huygens[1] proposed that every point which a luminous disturbance reaches becomes a source of a spherical wave; the sum of these secondary waves determines the form of the wave at any subsequent time. He assumed that the secondary waves travelled only in the "forward" direction and it is not explained in the theory why this is the case. He was able to provide a qualitative explanation of linear and spherical wave propagation, and to derive the laws of reflection and refraction using this principle, but could not explain the deviations from rectilinear propagation that occur when light encounters edges, apertures and screens, commonly known as diffraction effects.[2]

In 1816, Fresnel[3] showed that Huygens' principle, together with his own principle of interference could explain both the rectilinear propagation of light and also diffraction effects. To obtain agreement with experimental results, he had to include additional arbitrary assumptions about the phase and amplitude of the secondary waves, and also an obliquity factor. These assumptions have no obvious physical foundation but led to predictions that agreed with many experimental observations, including the Arago spot.

Poisson was a member of the French Academy, which reviewed Fresnel's work.[4] He used Fresnel's theory to predict that a bright spot will appear in the center of the shadow of a small disc and deduced from this that the theory was incorrect. However, Arago, another member of the committee, performed the experiment and showed that the prediction was correct. (Lisle had actually observed this fifty years earlier.[2]) This was one of the investigations that led to the victory of the wave theory of light over the then predominant corpuscular theory.

The Huygens–Fresnel principle provides a good basis for understanding and predicting the wave propagation of light. However, this article[5] provides an interesting discussion of the limitations of the principle and also of different scientists' views as to whether it is an accurate representation of reality or whether "Huygens' principle actually does give the right answer but for the wrong reasons".

Kirchhoff's diffraction formula provides a rigorous mathematical foundation for diffraction, based on the wave equation. The arbitrary assumptions made by Fresnel to arrive at the Huygens–Fresnel equation emerge automatically from the mathematics in this derivation.[6]

A simple example of the operation of the principle can be seen when two rooms are connected by an open doorway and a sound is produced in a remote corner of one of them. A person in the other room will hear the sound as if it originated at the doorway. As far as the second room is concerned, the vibrating air in the doorway is the source of the sound.

Mathematical expression of the principle 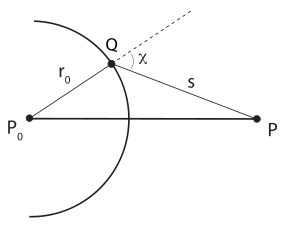 Consider the case of a point source located at a point P0, vibrating at a frequency f. The disturbance may be described by a complex variable U0 known as the complex amplitude. It produces a spherical wave with wavelength λ, wavenumber k = 2π/λ. The complex amplitude of the primary wave at the point Q located at a distance r0 from P0 is given by

Using Huygens' theory and the principle of superposition of waves, the complex amplitude at a further point P is found by summing the contributions from each point on the sphere of radius r0. In order to get agreement with experimental results, Fresnel found that the individual contributions from the secondary waves on the sphere had to be multiplied by a constant, −i/λ, and by an additional inclination factor, K(χ). The first assumption means that the secondary waves oscillate at a quarter of a cycle out of phase with respect to the primary wave, and that the magnitude of the secondary waves are in a ratio of 1:λ to the primary wave. He also assumed that K(χ) had a maximum value when χ = 0, and was equal to zero when χ = π/2. The complex amplitude at P is then given by:

where S describes the surface of the sphere, and s is the distance between Q and P.

Fresnel used a zone construction method to find approximate values of K for the different zones,[4] which enabled him to make predictions that were in agreement with experimental results.

The various assumptions made by Fresnel emerge automatically in Kirchhoff's diffraction formula,[4] to which the Huygens–Fresnel principle can be considered to be an approximation. Kirchhoff gave the following expression for K(χ):

Huygens' principle can be seen as a consequence of the isotropy of space—all directions in space are equal. Any disturbance created in a sufficiently small region of isotropic space (or in an isotropic medium) propagates from that region in all radial directions. The waves created by this disturbance, in turn, create disturbances in other regions, and so on. The superposition of all the waves results in the observed pattern of wave propagation.

Isotropy of space is fundamental to quantum electrodynamics (QED) where the wave function of any object propagates along all available unobstructed paths. When integrated along all possible paths, with a phase factor proportional to the path length, the interference of the wave-functions correctly predicts observable phenomena. Every point on the wave front acts as the source of secondary wavelets that spread out in the forward direction with the same speed as the wave. The new wave front is found by constructing the surface tangent to the secondary wavelets.