Template:Distinguish In abstract algebra, a homomorphism is a structure-preserving map between two algebraic structures (such as groups, rings, or vector spaces). The word homomorphism comes from the ancient Greek language: ὁμός (homos) meaning "same" and μορφή (morphe) meaning "form". Isomorphisms, automorphisms, and endomorphisms are special types of homomorphisms.

A homomorphism is a map that preserves selected structure between two algebraic structures, with the structure to be preserved being given by the naming of the homomorphism.

Particular definitions of homomorphism include the following:

Not all structure that an object possesses need be preserved by a homomorphism. For example, one may have a semigroup homomorphism between two monoids, and this will not be a monoid homomorphism if it does not map the identity of the domain to that of the codomain.

The algebraic structure to be preserved may include more than one operation, and a homomorphism is required to preserve each operation. For example, a ring has both addition and multiplication, and a homomorphism from the ring (R, +, ∗, 0, 1) to the ring (R′, +′, ∗′, 0′, 1′) is a function such that f(r + s) = f(r) +′ f(s), f(r ∗ s) = f(r) ∗′ f(s) and f(1) = 1′ for any elements r and s of the domain ring. If rings are not required to be unital, the last condition is omitted. In addition, if defining structures of (e.g. 0 and additive inverses in the case of a ring) were not necessarily preserved by the above, preserving these would be added requirements. 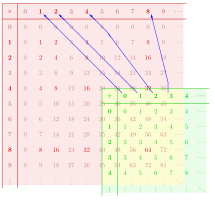 where r is a real number, then f is a homomorphism of rings, since f preserves both addition:

That is, ƒ(z) is the absolute value (or modulus) of the complex number z. Then f is a homomorphism of groups, since it preserves multiplication:

Note that ƒ cannot be extended to a homomorphism of rings (from the complex numbers to the real numbers), since it does not preserve addition:

As another example, the picture shows a monoid homomorphism f from the monoid (N, +, 0) to the monoid (N, ×, 1). Due to the different names of corresponding operations, the structure preservation properties satisfied by f amount to f(x + y) = f(x) × f(y) and f(0) = 1.

Because abstract algebra studies sets endowed with operations that generate interesting structure or properties on the set, functions which preserve the operations are especially important. These functions are known as homomorphisms.

Homomorphisms do not have to map between sets which have the same operations. For example, operation-preserving functions exist between the set of real numbers with addition and the set of positive real numbers with multiplication. A function which preserves operation should have this property: f(a + b) = f(a) · f(b), since addition is the operation in the first set and multiplication is the operation in the second. Given the laws of exponents, f(x) = ex satisfies this condition: 2 + 3 = 5 translates into e2 · e3 = e5. 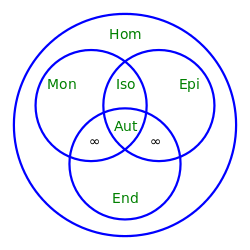 In abstract algebra, several specific kinds of homomorphisms are defined as follows:

These descriptions may be used in order to derive several interesting{{ safesubst:#invoke:Unsubst||date=__DATE__ |$B= {{#invoke:Category handler|main}}{{#invoke:Category handler|main}}[citation needed] }} properties. For instance, since a function is bijective if and only if it is both injective and surjective, in abstract algebra a homomorphism is an isomorphism if and only if it is both a monomorphism and an epimorphism. An isomorphism always has an inverse f−1, which is a homomorphism, too (cf. Proof 1). If there is an isomorphism between two algebraic structures, they are completely indistinguishable as far as the structure in question is concerned; in this case, they are said to be isomorphic.

Kernel of a homomorphism

Any homomorphism f : X → Y defines an equivalence relation ~ on X by a ~ b if and only if f(a) = f(b). The relation ~ is called the kernel of f. It is a congruence relation on X. The quotient set X / ~ can then be given an object-structure in a natural way, i.e. [x] ∗ [y] = [x ∗ y]. In that case the image of X in Y under the homomorphism f is necessarily isomorphic to X / ~; this fact is one of the isomorphism theorems. Note in some cases (e.g. groups or rings), a single equivalence class K suffices to specify the structure of the quotient; so we can write it X/K. (X/K is usually read as "X mod K".) Also in these cases, it is K, rather than ~, that is called the kernel of f (cf. normal subgroup).

In model theory, the notion of an algebraic structure is generalized to structures involving both operations and relations. Let L be a signature consisting of function and relation symbols, and A, B be two L-structures. Then a homomorphism from A to B is a mapping h from the domain of A to the domain of B such that

In the special case with just one binary relation, we obtain the notion of a graph homomorphism. For a detailed discussion of relational homomorphisms and isomorphisms see.[4]

Homomorphisms are also used in the study of formal languages[5] (although within this context, often they are briefly referred to as morphisms[6]). Given alphabets Σ1 and Σ2, a function h : Σ1∗ → Σ2∗ such that h(uv) = h(u) h(v) for all u and v in Σ1∗ is called a homomorphism (or simply morphism) on Σ1∗.[note 3] Let e denote the empty word. If h is a homomorphism on Σ1∗ and h(x) ≠ e for all x ≠ e in Σ1∗, then h is called an e-free homomorphism.

This type of homomorphism can be thought of as (and is equivalent to) a monoid homomorphism where Σ∗ the set of all words over a finite alphabet Σ is a monoid (in fact it is the free monoid on Σ) with operation concatenation and the empty word as the identity.