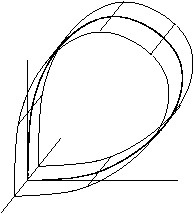 Consider the continuous dynamical system described by the ODE

Suppose there is an equilibrium at

is a homoclinic orbit if

Homoclinic orbits and homoclinic points are defined in the same way for iterated functions, as the intersection of the stable set and unstable set of some fixed point or periodic point of the system.

We also have the notion of homoclinic orbit when considering discrete dynamical systems. In such a case, if

is a diffeomorphism of a manifold

is a homoclinic point if it has the same past and future - more specifically, if it exists a fixed (or periodic) point

The existence of one homoclinic point implies the existence of infinite number of them.[1] This comes from its definition: the intersection of a stable and unstable set. Both sets are invariant by definition, which means that the forward iteration of the homoclinic point is both on the stable and unstable set. By iterating N times, the map approaches the equilibrium point by the stable set, but in every iteration it is on the unstable manifold too, which shows this property.

This property suggests that complicated dynamics arise by the existence of a homoclinic point. Indeed, Smale (1967)[2] showed that these points leads to horseshoe map like dynamics, which is associated with chaos.

By using the Markov partition, the long-time behaviour of hyperbolic system can be studied using the techniques of symbolic dynamics. In this case, a homoclinic orbit has a particularly simple and clear representation. Suppose that

is a finite set of M symbols. The dynamics of a point x is then represented by a bi-infinite string of symbols

A periodic point of the system is simply a recurring sequence of letters. A heteroclinic orbit is then the joining of two distinct periodic orbits. It may be written as

is a sequence of symbols of length k, (of course,

is another sequence of symbols, of length m (likewise,

with the intermediate sequence

being non-empty, and, of course, not being p, as otherwise, the orbit would simply be