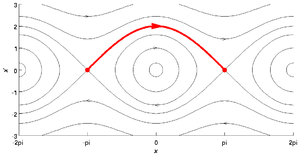 The phase portrait of the pendulum equation x'' + sin x = 0. The highlighted curve shows the heteroclinic orbit from (x, x') = (−π, 0) to (x, x') = (π, 0). This orbit corresponds with the (rigid) pendulum starting upright, making one revolution through its lowest position, and ending upright again.

Consider the continuous dynamical system described by the ODE

Suppose there are equilibria at

is a heteroclinic orbit from

and the unstable manifold of

By using the Markov partition, the long-time behaviour of hyperbolic system can be studied using the techniques of symbolic dynamics. In this case, a heteroclinic orbit has a particularly simple and clear representation. Suppose that

is a finite set of M symbols. The dynamics of a point x is then represented by a bi-infinite string of symbols

A periodic point of the system is simply a recurring sequence of letters. A heteroclinic orbit is then the joining of two distinct periodic orbits. It may be written as

is a sequence of symbols of length k, (of course,

is another sequence of symbols, of length m (likewise,

with the intermediate sequence

being non-empty, and, of course, not being p, as otherwise, the orbit would simply be