A triangle with sides a, b, and c.

In geometry, Heron's formula (sometimes called Hero's formula) is named after Hero of Alexandria[1] and states that the area of a triangle whose sides have lengths a, b, and c is

where s is the semiperimeter of the triangle; that is,

Heron's formula can also be written as

Heron's formula is distinguished from other formulas for the area of a triangle, such as half the base times the height or half the modulus of a cross product of two sides, by requiring no arbitrary choice of side as base or vertex as origin.

, and the area is

In this example, the side lengths and area are all integers, making it a Heronian triangle. However, Heron's formula works equally well in cases where one or all of these numbers is not an integer.

The formula is credited to Heron (or Hero) of Alexandria, and a proof can be found in his book, Metrica, written c. A.D. 60. It has been suggested that Archimedes knew the formula over two centuries earlier,[2] and since Metrica is a collection of the mathematical knowledge available in the ancient world, it is possible that the formula predates the reference given in that work.[3]

A formula equivalent to Heron's, namely

was discovered by the Chinese independently of the Greeks. It was published in Shushu Jiuzhang (“Mathematical Treatise in Nine Sections”), written by Qin Jiushao and published in A.D. 1247.

Heron's original proof made use of cyclic quadrilaterals, while other arguments appeal to trigonometry as below, or to the incenter and one excircle of the triangle [2].

A modern proof, which uses algebra and is quite unlike the one provided by Heron (in his book Metrica), follows.[4] Let a, b, c be the sides of the triangle and α, β, γ the angles opposite those sides. We have

by the law of cosines. From this proof get the algebraic statement that

The altitude of the triangle on base a has length b·sin γ, and it follows

The difference of two squares factorization was used in two different steps. 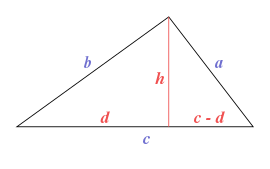 The following proof is very similar to one given by Raifaizen.[5] By the Pythagorean theorem we have

according to the figure at the right. Subtracting these yields

. This equation allows to express

For the height of the triangle we have that

We now apply this result to the formula that calculates the area of a triangle from its height:

Geometrical significance of s-a, s-b, and s-c. See the Law of cotangents for the reasoning behind this.

From the first part of the Law of cotangents proof,[6] we have that the triangle's area is both

but, since the sum of the half-angles is

, the triple cotangent identity applies, so the first of these is

Combining the two, we get

from which the result follows.

Heron's formula as given above is numerically unstable for triangles with a very small angle. A stable alternative [7] [8] involves arranging the lengths of the sides so that

The brackets in the above formula are required in order to prevent numerical instability in the evaluation.

Three other area formulas have the same structure as Heron's formula but are expressed in terms of different variables. First, denoting the medians from sides a, b, and c respectively as ma, mb, and mc and their semi-sum (ma + mb + mc)/2 as σ, we have[9]

where D is the diameter of the circumcircle:

Expressing Heron's formula with a Cayley–Menger determinant in terms of the squares of the distances between the three given vertices,

illustrates its similarity to Tartaglia's formula for the volume of a three-simplex.

Another generalization of Heron's formula to pentagons and hexagons inscribed in a circle was discovered by David P. Robbins.[12]

Heron-type formula for the volume of a tetrahedron