Frequency dispersion in groups of gravity waves on the surface of deep water. The red dot moves with the phase velocity, and the green dots propagate with the group velocity. In this deep-water case, the phase velocity is twice the group velocity. The red dot overtakes two green dots when moving from the left to the right of the figure.
New waves seem to emerge at the back of a wave group, grow in amplitude until they are at the center of the group, and vanish at the wave group front.
For surface gravity waves, the water particle velocities are much smaller than the phase velocity, in most cases.

The group velocity of a wave is the velocity with which the overall shape of the waves' amplitudes — known as the modulation or envelope of the wave — propagates through space.

For example, if a stone is thrown into the middle of a very still pond, a circular pattern of waves with a quiescent center appears in the water. The expanding ring of waves is the wave group, within which one can discern individual wavelets of differing wavelengths traveling at different speeds. The longer waves travel faster than the group as a whole, but their amplitudes diminish as they approach the leading edge. The shorter waves travel more slowly, and their amplitudes diminish as they emerge from the trailing boundary of the group. 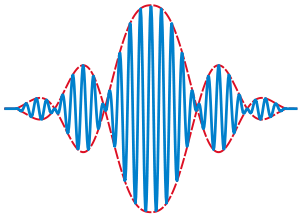 The function ω(k), which gives ω as a function of k, is known as the dispersion relation.

One derivation of the formula for group velocity is as follows.[6][7]

Consider a wave packet as a function of position x and time t: α(x,t). Let A(k) be its Fourier transform at time t=0:

By the superposition principle, the wavepacket at any time t is:

where ω is implicitly a function of k. We assume that the wave packet α is almost monochromatic, so that A(k) is nonzero only in the vicinity of a central wavenumber k0. Then, linearization gives:

. Then, after some algebra,

The factor in front of the integral has absolute value 1. Therefore,

i.e. the envelope of the wavepacket travels at velocity

. This explains the group velocity formula.

Distortion of wave groups by higher-order dispersion effects, for surface gravity waves on deep water (with vg = ½vp). The superposition of three wave components – with respectively 22, 25 and 29 meter wavelengths, fitting in a periodic horizontal domain of 2 km length – is shown. The wave amplitudes of the components are respectively 1, 2 and 1 meter.

Part of the previous derivation is the assumption:

If the wavepacket has a relatively large frequency spread, or if the dispersion

has sharp variations (such as due to a resonance), or if the packet travels over very long distances, this assumption is not valid. As a result, the envelope of the wave packet not only moves, but also distorts. Loosely speaking, different frequency-components of the wavepacket travel at different speeds, with the faster components moving towards the front of the wavepacket and the slower moving towards the back. Eventually, the wave packet gets stretched out.

) is called group velocity dispersion. This is an important effect in the propagation of signals through optical fibers and in the design of high-power, short-pulse lasers.

The idea of a group velocity distinct from a wave's phase velocity was first proposed by W.R. Hamilton in 1839, and the first full treatment was by Rayleigh in his "Theory of Sound" in 1877.[13]

For light, the refractive index n, vacuum wavelength λ0, and wavelength in the medium λ, are related by

with vp = ω/k the phase velocity.

The group velocity, therefore, can be calculated by any of the following formulas:

{{#invoke:see also|seealso}} For waves traveling through three dimensions, such as light waves, sound waves, and matter waves, the formulas for phase and group velocity are generalized in a straightforward way:[14]

means the gradient of the angular frequency

as a function of the wave vector

is the unit vector in direction k.

If the waves are propagating through an anisotropic (i.e., not rotationally symmetric) medium, for example a crystal, then the phase velocity vector and group velocity vector may point in different directions.