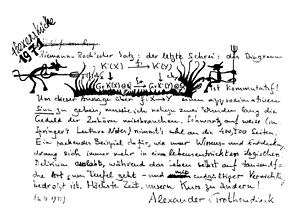 The theorem has been very influential, not least for the development of the Atiyah–Singer index theorem. Conversely, complex analytic analogues of the Grothendieck–Riemann–Roch theorem can be proved using the index theorem for families. Alexander Grothendieck gave a first proof in a 1957 manuscript, later published.[1] Armand Borel and Jean-Pierre Serre wrote up and published Grothendieck's proof in 1958.[2] Later, Grothendieck and his collaborators simplified and generalized the proof.[3]

Let X be a smooth quasi-projective scheme over a field. Under these assumptions, the Grothendieck group

is the Chow group of cycles on X of dimension d modulo rational equivalence, tensored with the rational numbers. In case X is defined over the complex numbers, the latter group maps to the topological cohomology group

between smooth quasi-projective schemes and a bounded complex of sheaves

Here td(X) is the Todd genus of (the tangent bundle of) X. Thus the theorem gives a precise measure for the lack of commutativity of taking the push forwards in the above senses and the Chern character and shows that the needed correction factors depend on X and Y only. In fact, since the Todd genus is functorial and multiplicative in exact sequences, we can rewrite the Grothendieck–Riemann–Roch formula as

where Tf is the relative tangent sheaf of f, defined as the element TX − f*TY in K0(X). For example, when f is a smooth morphism, Tf is simply a vector bundle, known as the tangent bundle along the fibers of f.

The Hirzebruch–Riemann–Roch theorem is (essentially) the special case where Y is a point and the field is the field of complex numbers.

Alexander Grothendieck's version of the Riemann–Roch theorem was originally conveyed in a letter to Jean-Pierre Serre around 1956–7. It was made public at the initial Bonn Arbeitstagung, in 1957. Serre and Armand Borel subsequently organized a seminar at Princeton to understand it. The final published paper was in effect the Borel–Serre exposition.

The significance of Grothendieck's approach rests on several points. First, Grothendieck changed the statement itself: the theorem was, at the time, understood to be a theorem about a variety, whereas Grothendieck saw it as a theorem about a morphism between varieties. By finding the right generalization, the proof became simpler while the conclusion became more general. In short, Grothendieck applied a strong categorical approach to a hard piece of analysis. Moreover, Grothendieck introduced K-groups, as discussed above, which paved the way for algebraic K-theory.