Graph of a function

Graph of the the function f(x) = x4 − 4x over the interval [−2,+3]. Also shown are its two real roots and global minimum over the same interval.

Informally, if x is a real number and f is a real function, graph may mean the graphical representation of this collection, in the form of a line chart: a curve on a Cartesian plane, together with Cartesian axes, etc. Graphing on a Cartesian plane is sometimes referred to as curve sketching. The graph of a function on real numbers may be mapped directly to the graphic representation of the function. For general functions, a graphic representation cannot necessarily be found and the formal definition of the graph of a function suits the need of mathematical statements, e.g., the closed graph theorem in functional analysis.

The concept of the graph of a function is generalized to the graph of a relation. Note that although a function is always identified with its graph, they are not the same because it will happen that two functions with different codomain could have the same graph. For example, the cubic polynomial mentioned below is a surjection if its codomain is the real numbers but it is not if its codomain is the complex field.

In science, engineering, technology, finance, and other areas, graphs are tools used for many purposes. In the simplest case one variable is plotted as a function of another, typically using rectangular axes; see Plot (graphics) for details.

In the modern foundation of mathematics known as set theory, a function and its graph are essentially the same thing.[1] 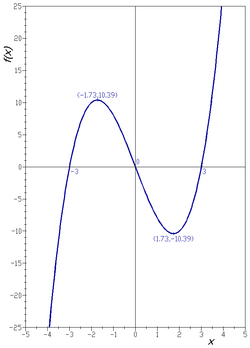 Functions of one variable 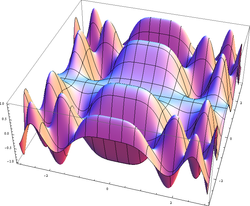 The graph of the function.

The graph of the cubic polynomial on the real line

If this set is plotted on a Cartesian plane, the result is a curve (see figure).

The graph of the trigonometric function on the real line

If this set is plotted on a three dimensional Cartesian coordinate system, the result is a surface (see figure).

Normal to a graph

Given a function f of n variables:

, the normal to the graph is

(up to multiplication by a constant). This is seen by considering the graph as a level set of the function

is normal to the level sets.