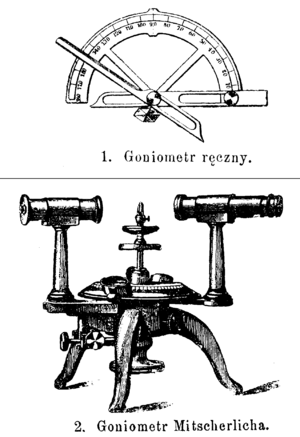 Manual (1), and Mitscherlich's optical (2) goniometers for use in crystallography, c. 1900

A goniometer is an instrument that either measures an angle or allows an object to be rotated to a precise angular position. The term goniometry is derived from two Greek words, gōnia, meaning angle, and metron, meaning measure.

In crystallography, goniometers are used for measuring angles between crystal faces. They are also used in X-ray diffraction to rotate the samples. The groundbreaking investigations of physicist Max von Laue and cohorts into the atomic structure of crystals in 1912 involved a goniometer.

Goniophotometers measure the spatial distribution of light visible to the human eye at a specific angular position.

Medical practitioners, (Physicians, Physician Assistants, Physical Therapists, Athletic Trainers, Chiropractors and Nurse Practitioners) use a goniometer to document initial and subsequent range of motion, at the visits for Occupational injuries, and by disability evaluators to determine a permanent disability. This is to evaluate progress, and also for medico-legal purposes. It is a tool to evaluate Waddell's signs (findings that may indicate symptom magnification.) 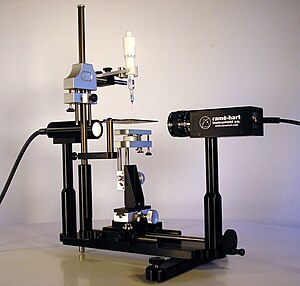 A liquid droplet rests on a solid surface and is surrounded by gas. The contact angle, θC, is the angle formed by a liquid at the three phase boundary where the liquid, gas, and solid intersect.

The contact angle, θ, is the angle formed by a liquid at the three phase boundary where the liquid, gas, and solid intersect. The contact angle depends on the interfacial tensions between the gas & liquid, liquid & solid, and gas & solid. Young’s Relation expresses the contact angle analytically.[2]

= Interfacial tension between the solid and gas

= Interfacial tension between the solid and liquid

= Interfacial tension between the liquid and gas

Contact angle goniometers measure a droplet’s contact angle by assuming the droplet fits the geometry of a sphere, ellipsoid, or the Young–Laplace relation. 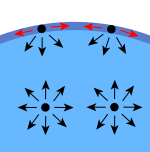 Surface tension exists because the molecules inside a liquid experience roughly equal cohesive forces in all directions, but molecules at the surface experience larger attractive forces toward the liquid than toward gas

Iterative approximations can solve for β. 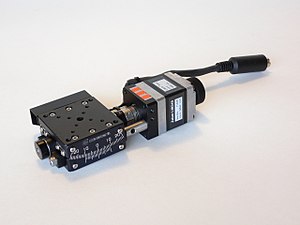 A miniature electro-mechanical goniometer stage. This type of stage is used primarily in the field of lasers and optics.

A positioning goniometer or goniometric stage is a device used to rotate an object precisely about a fixed axis in space. It is similar to a linear stage, however, rather than moving linearly with respect to its base, the stage platform rotates partially about a fixed axis above the mounting surface of the platform. Positioning goniometers typically use a worm drive with a partial worm wheel fixed to the underside of the stage platform meshing with a worm in the base. The worm may be rotated manually or by a motor as in automated positioning systems.

The included cutting angles of all kinds of sharp edge blades is measured using a laser reflecting goniometer. Developed by CATRA in the UK, a range of devices can accurately determine the cutting edge profile including a rounding of the tip to ½°. The included angle of a blade is important in controlling its cutting ability and edge strength, i.e. a low angle makes the edge thin and optimized for cutting while a large angle makes it thick, which cuts poorly, but is very strong.