During World War II, production of German tanks such as the Panther was accurately estimated by Allied intelligence using statistical methods.

In the statistical theory of estimation, the problem of estimating the maximum of a discrete uniform distribution from sampling without replacement is known in English as the German tank problem, due to its application in World War II to the estimation of the number of German tanks.

The analyses illustrate the difference between frequentist inference and Bayesian inference.

Estimating the population maximum based on a single sample yields divergent results, while the estimation based on multiple samples is an instructive practical estimation question whose answer is simple but not obvious.

Suppose an intelligence officer has spotted k = 4 tanks with serial numbers, 2, 6, 7, and 14, with the maximum observed serial number, m = 14. The unknown total number of tanks is called N.

Whereas, the Bayesian analysis below yields (primarily) a probability mass function for the number of tanks

from which we can estimate the number of tanks according to

This distribution has positive skewness, related to the fact that there are at least 14 tanks. 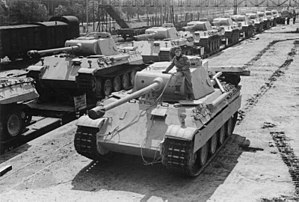 Panther tanks are loaded for transport to frontline units, 1943.

The allied command structure had thought the Panzer V (Panther) tanks seen in Italy, with their high velocity, long barreled 75 mm/L70 guns, were unusual heavy tanks, and would only be seen in northern France in small numbers, much the same way as the Tiger I was seen in Tunisia. The US Army was confident that the Sherman tank would perform well against the Panzer III and IV tanks that they expected to meet.[N 1] Shortly before D-Day, rumors indicated that large numbers of Panzer V tanks were being used.

To ascertain if this were true the Allies attempted to estimate the number of tanks being produced. To do this they used the serial numbers on captured or destroyed tanks. The principal numbers used were gearbox numbers, as these fell in two unbroken sequences. Chassis and engine numbers were also used, though their use was more complicated. Various other components were used to cross-check the analysis. Similar analyses were done on tires, which were observed to be sequentially numbered (i.e., 1, 2, 3, ..., N).Template:SfnTemplate:Efn[2][3]

German records after the war showed production for the month of February 1944 was 276.Template:Sfn[N 2] The statistical approach proved to be far more accurate than conventional intelligence methods, and the phrase "German tank problem" became accepted as a descriptor for this type of statistical analysis.

Estimating production was not the only use of this serial number analysis. It was also used to understand German production more generally, including number of factories, relative importance of factories, length of supply chain (based on lag between production and use), changes in production, and use of resources such as rubber.

According to conventional Allied intelligence estimates, the Germans were producing around 1,400 tanks a month between June 1940 and September 1942. Applying the formula below to the serial numbers of captured tanks, the number was calculated to be 246 a month. After the war, captured German production figures from the ministry of Albert Speer showed the actual number to be 245.[2]

Estimates for some specific months are given as:Template:Sfn[5] 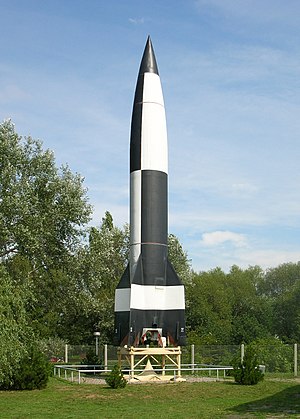 Similar serial number analysis was used for other military equipment during World War II, most successfully for the V-2 rocket.Template:Sfn

In the 1980s, some Americans were given access to the production line of Israel's Merkava tanks. The production numbers were classified, but the tanks had serial numbers, allowing estimation of production.Template:Sfn

The formula has been used in non-military contexts, for example to estimate the number of Commodore 64 computers built, where the result (12.5 million) matches the official figures quite well.[6]

{{ safesubst:#invoke:Unsubst||$N=Unreferenced section |date=__DATE__ |$B= {{ safesubst:#invoke:Unsubst||$N=Unreferenced |date=__DATE__ |$B= {{#invoke:Message box|ambox}} }} }} To prevent serial number analysis, serial numbers can be excluded, or usable auxiliary information reduced. Alternatively, serial numbers that resist cryptanalysis can be used, most effectively by randomly choosing numbers without replacement from a list that is much larger than the number of objects produced (compare the one-time pad), or produce random numbers and check them against the list of already assigned numbers; collisions are likely to occur unless the number of digits possible is more than twice the number of digits in the number of objects produced (where the serial number can be in any base); see birthday problem.Template:Efn For this, a cryptographically secure pseudorandom number generator may be used. All these methods require a lookup table (or breaking the cypher) to back out from serial number to production order, which complicates use of serial numbers: a range of serial numbers cannot be recalled, for instance, but each must be looked up individually, or a list generated.

Alternatively, sequential serial numbers can be encrypted, which allows easy decoding, but then there is a known-plaintext attack: even if starting from an arbitrary point, the plaintext has a pattern (namely, numbers are in sequence). One example is given in Ken Follett's novel "Code to Zero", where the encryption of the Jupiter C rocket serial numbers is described as:

For point estimation (estimating a single value for the total(

This has a variance ofTemplate:Sfn

so a standard deviation of approximately N/k, the (population) average size of a gap between samples; compare m/k above.

This can be visualized by imagining that the samples are evenly spaced throughout the range, with additional samples just outside the range at 0 and N + 1. If starting with an initial gap between 0 and the lowest sample (sample minimum), the average gap between samples is

being because the samples themselves are not counted in computing the gap between samples.Template:Efn

This philosophy is formalized and generalized in the method of maximum spacing estimation.

The probability that the sample maximum equals m is

is the binomial coefficient.

The expected value of the sample maximum is

is an unbiased estimator of N.

To show that this is the UMVU estimator:

Instead of, or in addition to, point estimation, interval estimation can be carried out, such as confidence intervals. These are easily computed, based on the observation that the probability that k samples will fall in an interval covering p of the range (0 ≤ p ≤ 1) is pk (assuming in this section that draws are with replacement, to simplify computations; if draws are without replacement, this overstates the likelihood, and intervals will be overly conservative).

, so a confidence interval of approximately

. The lower bound is very close to m, so more informative is the asymmetric confidence interval from p = 5% to 100%; for k = 5 this yields

. For a range of k, with the UMVU point estimator (plus 1 for legibility) for reference, this yields:

In some fields, notably futurology, estimation of confidence intervals in this way, based on a single sample – considering it as a randomly sampled quantile (by mediocrity principle) – is known as the Copernican principle. This is particularly applied to estimate lifetimes based on current age, notably in the doomsday argument, which applies it to estimate the expected survival time of the human race.

that the number of enemy tanks

, when the number of observed tanks,

, and the maximum serial number

The rule for conditional probability gives

, when the number of enemy tanks is known to be equal to

enemy tanks have been observed. It is

where the binomial coefficient

is the number of

-sized samples from an

is the credibility that the total number of tanks is equal to n when k tanks have been observed but before the serial numbers have actually been observed. Assume that it is some discrete uniform distribution

must be finite, because the function

which is not a probability mass distribution function.

, then the unwelcome variable

disappears from the expression.

For k ≥ 1 the mode of the distribution of the number of enemy tanks is m.

For k ≥ 2, the credibility that the number of enemy tanks is equal to

and the credibility that the number of enemy tanks,

has the finite mean value:

has the finite standard deviation:

These formulas are derived below.

The following binomial coefficient identity is used below for simplifying series relating to the German Tank Problem.

This sum formula is somewhat analogous to the integral formula

These formulas apply for k > 1.

Observing one tank randomly out of a population of n tanks gives the serial number m with probability 1/n for m ≤ n, and zero probability for m > n. Using Iverson bracket notation this is written

This is the conditional probability mass distribution function of

When considered a function of n for fixed m this is a likelihood function.

The maximum likelihood estimate for the total number of tanks is N0 = m.

The total likelihood is infinite, being a tail of the harmonic series.

is the harmonic number.

The credibility mass distribution function depends on the prior limit

The mean value of

If two tanks rather than one are observed, then the probability that the larger of the observed two serial numbers is equal to m, is

The total likelihood is

and the credibility mass distribution function is

and so the median is

but the mean value of N is infinite

The conditional probability that the largest of k observations taken from the serial numbers {1,...,n}, is equal to m, is

The likelihood function of n is the same expression

The total likelihood is finite for k ≥ 2:

The credibility mass distribution function is

The complementary cumulative distribution function is the credibility that N > x

The cumulative distribution function is the credibility that N ≤ x

The order of magnitude of the number of enemy tanks is

The statistical uncertainty is the standard deviation σ, satisfying the equation

The variance-to-mean ratio is simply

Other discussions of the estimation