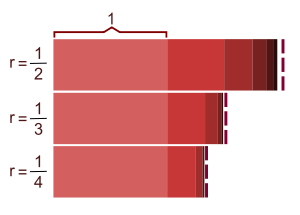 Diagram illustrating three basic geometric sequences of the pattern 1(rn−1) up to 6 iterations deep. The first block is a unit block and the dashed line represents the infinite sum of the sequence, a number that it will forever approach but never touch: 2, 3/2, and 4/3 respectively.

where r ≠ 0 is the common ratio and a is a scale factor, equal to the sequence's start value.

Such a geometric sequence also follows the recursive relation

Generally, to check whether a given sequence is geometric, one simply checks whether successive entries in the sequence all have the same ratio.

The common ratio of a geometric sequence may be negative, resulting in an alternating sequence, with numbers switching from positive to negative and back. For instance

is a geometric sequence with common ratio −3.

An interesting result of the definition of a geometric progression is that for any value of the common ratio, any three consecutive terms a, b and c will satisfy the following equation:

where b is considered to be the geometric mean between a and c.

Computation of the sum 2 + 10 + 50 + 250. The sequence is multiplied term by term by 5, and then subtracted from the original sequence. Two terms remain: the first term, a, and the term one beyond the last, or arm. The desired result, 312, is found by subtracting these two terms and dividing by 1 − 5.

A geometric series is the sum of the numbers in a geometric progression. For example:

Letting a be the first term (here 2), m be the number of terms (here 4), and r be the constant that each term is multiplied by to get the next term (here 5), the sum is given by:

In the example above, this gives:

The formula works for any real numbers a and r (except r = 1, which results in a division by zero). For example:

To derive this formula, first write a general geometric series as:

We can find a simpler formula for this sum by multiplying both sides of the above equation by 1 − r, and we'll see that

since all the other terms cancel. If r ≠ 1, we can rearrange the above to get the convenient formula for a geometric series that computes the sum of n terms:

If one were to begin the sum not from k=0, but from a different value, say m, then

For a geometric series containing only even powers of r multiply by  1 − r2  :

Equivalently, take  r2  as the common ratio and use the standard formulation.

For a series with only odd powers of r

Template:Offtopic {{#invoke:main|main}} An infinite geometric series is an infinite series whose successive terms have a common ratio. Such a series converges if and only if the absolute value of the common ratio is less than one (|r| < 1). Its value can then be computed from the finite sum formulae 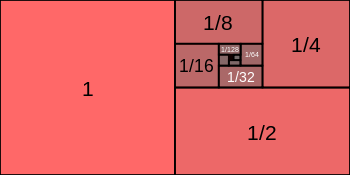 For a series containing only even powers of

and for odd powers only,

In cases where the sum does not start at k = 0,

The formulae given above are valid only for |r| < 1. The latter formula is valid in every Banach algebra, as long as the norm of r is less than one, and also in the field of p-adic numbers if |r|p < 1. As in the case for a finite sum, we can differentiate to calculate formulae for related sums. For example,

It is a geometric series whose first term is 1/2 and whose common ratio is 1/2, so its sum is

It is a geometric series whose first term is 1/2 and whose common ratio is −1/2, so its sum is

The proof of this comes from the fact that

which is a consequence of Euler's formula. Substituting this into the original series gives

The product of a geometric progression is the product of all terms. If all terms are positive, then it can be quickly computed by taking the geometric mean of the progression's first and last term, and raising that mean to the power given by the number of terms. (This is very similar to the formula for the sum of terms of an arithmetic sequence: take the arithmetic mean of the first and last term and multiply with the number of terms.)

Let the product be represented by P:

Now, carrying out the multiplications, we conclude that

Applying the sum of arithmetic series, the expression will yield

We raise both sides to the second power:

which concludes the proof.

Relationship to geometry and Euclid's work

Books VIII and IX of Euclid's Elements analyzes geometric progressions (such as the powers of two, see the article for details) and give several of their properties.[1]