In each of these three forms, both parameters are positive real numbers.

If k is an integer, then the distribution represents an Erlang distribution; i.e., the sum of k independent exponentially distributed random variables, each of which has a mean of θ (which is equivalent to a rate parameter of 1/θ). 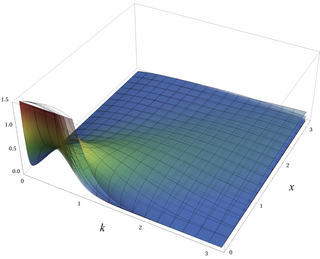 The probability density function using the shape-scale parametrization is

Here Γ(k) is the gamma function evaluated at k.

The cumulative distribution function is the regularized gamma function:

It can also be expressed as follows, if k is a positive integer (i.e., the distribution is an Erlang distribution):[4]

Alternatively, the gamma distribution can be parameterized in terms of a shape parameter α = k and an inverse scale parameter β = 1/θ, called a rate parameter. A random variable X that is gamma-distributed with shape α and rate β is denoted

The corresponding density function in the shape-rate parametrization is

Both parametrizations are common because either can be more convenient depending on the situation.

The cumulative distribution function is the regularized gamma function:

The skewness is equal to

, it depends only on the shape parameter (k) and approaches a normal distribution when k is large (approximately when k > 10).

Unlike the mode and the mean which have readily calculable formulas based on the parameters, the median does not have an easy closed form equation. The median for this distribution is defined as the value ν such that

A formula for approximating the median for any gamma distribution, when the mean is known, has been derived based on the fact that the ratio μ/(μ − ν) is approximately a linear function of k when k ≥ 1.[5] The approximation formula is

provided all Xi are independent.

For the cases where the Xi are independent but have different scale parameters see Mathai (1982) and Moschopoulos (1984).

Hence the use of the term "scale parameter" to describe θ.

Hence the use of the term "inverse scale parameter" to describe β.

The gamma distribution is a two-parameter exponential family with natural parameters k − 1 and −1/θ (equivalently, α − 1 and −β), and natural statistics X and ln(X).

If the shape parameter k is held fixed, the resulting one-parameter family of distributions is a natural exponential family.

One can show that

where ψ is the digamma function.

The information entropy is

In the k, θ parameterization, the information entropy is given by 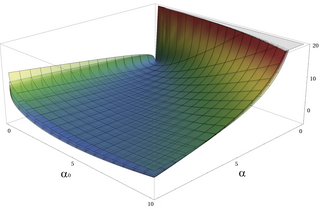 Illustration of the Kullback–Leibler (KL) divergence for two gamma PDFs. Here β = β0 + 1 which are set to 1, 2, 3, 4, 5 and 6. The typical asymmetry for the KL divergence is clearly visible.

The Laplace transform of the gamma PDF is

The likelihood function for N iid observations (x1, ..., xN) is

from which we calculate the log-likelihood function

Finding the maximum with respect to θ by taking the derivative and setting it equal to zero yields the maximum likelihood estimator of the θ parameter:

Substituting this into the log-likelihood function gives

There is no closed-form solution for k. The function is numerically very well behaved, so if a numerical solution is desired, it can be found using, for example, Newton's method. An initial value of k can be found either using the method of moments, or using the approximation

then k is approximately

which is within 1.5% of the correct value.[7] An explicit form for the Newton–Raphson update of this initial guess is:[8]

With known k and unknown θ, the posterior density function for theta (using the standard scale-invariant prior for θ) is

Integration over θ can be carried out using a change of variables, revealing that 1/θ is gamma-distributed with parameters α = Nk, β = y.

Given the scaling property above, it is enough to generate gamma variables with θ = 1 as we can later convert to any value of β with simple division.

where Uk are all uniformly distributed on (0, 1] and independent. All that is left now is to generate a variable distributed as Gamma(δ, 1) for 0 < δ < 1 and apply the "α-addition" property once more. This is the most difficult part.

The following is a version of the Ahrens-Dieter acceptance–rejection method:[11]

A summary of this is

While the above approach is technically correct, Devroye notes that it is linear in the value of k and in general is not a good choice. Instead he recommends using either rejection-based or table-based methods, depending on context.[15]

The gamma distribution's conjugate prior is:[16]

where Z is the normalizing constant, which has no closed-form solution. The posterior distribution can be found by updating the parameters as follows:

where n is the number of observations, and xi is the ith observation.

In bacterial gene expression, the copy number of a constitutively expressed protein often follows the gamma distribution, where the scale and shape parameter are, respectively, the mean number of bursts per cell cycle and the mean number of protein molecules produced by a single mRNA during its lifetime.[21]

In genomics, the gamma distribution was applied in peak calling step (i.e. in recognition of signal) in ChIP-chip[22] and ChIP-seq[23] data analysis.