In functional analysis, a branch of mathematics, for a linear operator S mapping a function space V to itself, it is sometimes possible to define an infinite-dimensional generalization of the determinant. The corresponding quantity det(S) is called the functional determinant of S.

There are several formulas for the functional determinant. They are all based on the determinant of diagonalizable finite-dimensional matrices being equal to the product of its eigenvalues. A mathematically rigorous definition is via the zeta function of the operator,

where tr stands for the functional trace: the determinant is then defined by

where the zeta function in the point s = 0 is defined by analytic continuation. Another possible generalization, often used by physicists when using the Feynman path integral formalism in quantum field theory (QFT), uses a functional integration:

This path integral is only well defined up to some divergent multiplicative constant. To give it a rigorous meaning it must be divided by another functional determinant, thus effectively cancelling the problematic 'constants'.

For a positive selfadjoint operator S on a finite-dimensional Euclidean space V, the formula

The problem is to find a way to make sense of the determinant of an operator S on an infinite dimensional function space. One approach, favored in quantum field theory, in which the function space consists of continuous paths on a closed interval, is to formally attempt to calculate the integral

where V is the function space and

the L2 inner product, and

the Wiener measure. The basic assumption on S is that it should be selfadjoint, and have discrete spectrum λ1, λ2, λ3… with a corresponding set of eigenfunctions f1, f2, f3… which are complete in L2 (as would, for example, be the case for the second derivative operator on a compact interval Ω). This roughly means all functions φ can be written as linear combinations of the functions fi:

Hence the inner product in the exponential can be written as

This makes the functional integral a product of Gaussian integrals:

The integrals can then be evaluated, giving

where N is an infinite constant that needs to be dealt with by some regularization procedure. The product of all eigenvalues is equal to the determinant for finite-dimensional spaces, and we formally define this to be the case in our infinite-dimensional case also. This results in the formula

If all quantities converge in an appropriate sense, then the functional determinant can be described as a classical limit (Watson and Whittaker). Otherwise, it is necessary to perform some kind of regularization. The most popular of which for computing functional determinants is the zeta function regularization.[1] For instance, this allows for the computation of the determinant of the Laplace and Dirac operators on a Riemannian manifold, using the Minakshisundaram–Pleijel zeta function. Otherwise, it is also possible to consider the quotient of two determinants, making the divergent constants cancel.

Let S be an elliptic differential operator with smooth coefficients which is positive on functions of compact support. That is, there exists a constant c > 0 such that

for all compactly supported smooth functions φ. Then S has a self-adjoint extension to an operator on L2 with lower bound c. The eigenvalues of S can be arranged in a sequence

Then the zeta function of S is defined by the series:[2]

and so if the functional determinant is well-defined, then it should be given by

Since the analytic continuation of the zeta function is regular at zero, this can be rigorously adopted as a definition of the determinant.

, integration over 'a' gives

is the Hurwitz Zeta function 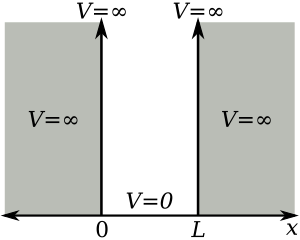 The infinite potential well with A = 0.

We will compute the determinant of the following operator describing the motion of a quantum mechanical particle in an infinite potential well:

Now we can use Euler's infinite product representation for the sine function:

from which a similar formula for the hyperbolic sine function can be derived:

Applying this, we find that

Another way for computing the functional determinant

For one-dimensional potentials, a short-cut yielding the functional determinant exists.[4] It is based on consideration of the following expression:

If we construct the function

which is also a meromorphic function of m, we see that it has exactly the same poles and zeroes as the quotient of determinants we are trying to compute: if m is an eigenvalue of the operator number one, then ψm1(x) will be an eigenfunction thereof, meaning ψm1(L) = 0; and analogously for the denominator. By Liouville's theorem, two meromorphic functions with the same zeros and poles must be proportional to one another. In our case, the proportionality constant turns out to be one, and we get

The problem in the previous section can be solved more easily with this formalism. The functions ψ0i(x) obey

This gives the final expression