Full width at half maximum 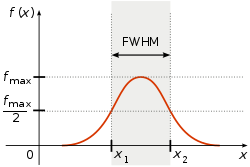 full width at half maximum

FWHM is applied to such phenomena as the duration of pulse waveforms and the spectral width of sources used for optical communications and the resolution of spectrometers.

The term full duration at half maximum (FDHM) is preferred when the independent variable is time.

The convention of "width" meaning "half maximum" is also widely used in signal processing to define bandwidth as "width of frequency range where less than half the signal's power is attenuated", i.e., the power is at least half the maximum. In signal processing terms, this is at most −3 dB of attenuation, called "half power point".

If the considered function is the normal distribution of the form

is the standard deviation and

can be any value (the width of the function does not depend on translation), then the relationship between FWHM and the standard deviation is[1]

In spectroscopy half the width at half maximum (here γ), HWHM, is in common use. For example, a Lorentzian/Cauchy distribution of height (1/πγ) can be defined by

Another important distribution function, related to solitons in optics, is the hyperbolic secant:

Any translating element was omitted, since it does not affect the FWHM. For this impulse we have:

where arsech is the inverse hyperbolic secant.