{{#invoke:Hatnote|hatnote}} {{ safesubst:#invoke:Unsubst||$N=Refimprove |date=__DATE__ |$B= {{#invoke:Message box|ambox}} }} In mathematics, and in other disciplines involving formal languages, including mathematical logic and computer science, a free variable is a notation that specifies places in an expression where substitution may take place. Some older books use the terms real variable and apparent variable for free variable and bound variable. The idea is related to a placeholder (a symbol that will later be replaced by some literal string), or a wildcard character that stands for an unspecified symbol.

In computer programming, the term free variable refers to variables used in a function that are not local variables nor parameters of that function.[1] The term non-local variable is often a synonym in this context.

A bound variable is a variable that was previously free, but has been bound to a specific value or set of values. For example, the variable x becomes a bound variable when we write:

In either of these propositions, it does not matter logically whether we use x or some other letter. However, it could be confusing to use the same letter again elsewhere in some compound proposition. That is, free variables become bound, and then in a sense retire from being available as stand-in values for other values in the creation of formulae.

The term "dummy variable" is also sometimes used for a bound variable (more often in general mathematics than in computer science), but that use can create an ambiguity with the definition of dummy variables in regression analysis.

Before stating a precise definition of free variable and bound variable, the following are some examples that perhaps make these two concepts clearer than the definition would:

n is a free variable and k is a bound variable; consequently the value of this expression depends on the value of n, but there is nothing called k on which it could depend.

y is a free variable and x is a bound variable; consequently the value of this expression depends on the value of y, but there is nothing called x on which it could depend.

x is a free variable and h is a bound variable; consequently the value of this expression depends on the value of x, but there is nothing called h on which it could depend.

z is a free variable and x and y are bound variables; consequently the logical value of this expression depends on the value of z, but there is nothing called x or y on which it could depend.

are variable-binding operators. Each of them binds the variable x.

Note that many of these are operators which act on functions of the bound variable. In more complicated contexts, such notations can become awkward and confusing. It can be useful to switch to notations which make the binding explicit, such as 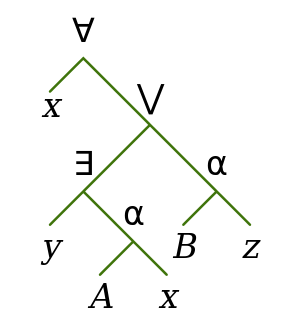 Tree summarizing the syntax of the expression

Variable-binding mechanisms occur in different contexts in mathematics, logic and computer science. In all cases, however, they are purely syntactic properties of expressions and variables in them. For this section we can summarize syntax by identifying an expression with a tree whose leaf nodes are variables, constants, function constants or predicate constants and whose non-leaf nodes are logical operators. This expression can then be determined by doing an inorder traversal of the tree. Variable-binding operators are logical operators that occur in almost every formal language. Indeed languages that do not have them are either extremely inexpressive or extremely difficult to use. A binding operator Q takes two arguments: a variable v and an expression P, and when applied to its arguments produces a new expression Q(v, P). The meaning of binding operators is supplied by the semantics of the language and does not concern us here.

In the lambda calculus, x is a bound variable in the term M = λ x . T, and a free variable of T. We say x is bound in M and free in T. If T contains a subterm λ x . U then x is rebound in this term. This nested, inner binding of x is said to "shadow" the outer binding. Occurrences of x in U are free occurrences of the new x.

A closed term is one containing no free variables.

To give an example from mathematics, consider an expression which defines a function

where t is an expression. t may contain some, all or none of the x1, ..., xn and it may contain other variables. In this case we say that function definition binds the variables x1, ..., xn.

could be treated as a notation for

is an operator with two parameters—a one-parameter function, and a set to evaluate that function over. The other operators listed above can be expressed in similar ways; for example, the universal quantifier

can be thought of as an operator that evaluates to the logical conjunction of the boolean-valued function P applied over the (possibly infinite) set S.

When analyzed in formal semantics, natural languages can be seen to have free and bound variables. In English, personal pronouns like he, she, they, etc. can act as free variables.

In the sentence above, the possessive pronoun her is a free variable. It may refer to the previously mentioned Lisa or to any other female. In other words, her book could be referring to Lisa's book (an instance of coreference) or to a book that belongs to a different female (e.g. Jane's book). Whoever the referent of her is can be established according to the situational (i.e. pragmatic) context. The identity of the referent can be shown using coindexing subscripts where i indicates one referent and j indicates a second referent (different from i). Thus, the sentence Lisa found her book has the following interpretations:

The distinction is not purely of academic interest, as some languages do actually have different forms for heri and herj: for example, Norwegian translates coreferent heri as sin and noncoreferent herj as hennes.

the reflexive herself can only refer to the previously mentioned antecedent Jane. It can never refer to a different female person. In other words, the person being hurt and the person doing the hurting are both the same person, i.e. Jane. The semantics of this sentence is abstractly: JANE hurt JANE. And it cannot be the case that this sentence could mean JANE hurt LISA. The reflexive herself must refer and can only refer to the previously mentioned Jane. In this sense, the variable herself is bound to the noun Jane that occurs in subject position. Indicating the coindexation, the first interpretation with Jane and herself coindexed is permissible, but the other interpretation where they are not coindexed is ungrammatical (the ungrammatical interpretation is indicated with an asterisk):

Note that the coreference binding can be represented using a lambda expression as mentioned in the previous Formal explanation section. The sentence with the reflexive could be represented as

in which Jane is the subject referent argument and λx.x hurt x is the predicate function (a lambda abstraction) with the lambda notation and x indicating both the semantic subject and the semantic object of sentence as being bound. This returns the semantic interpretation JANE hurt JANE with JANE being the same person.

Pronouns can also behave in a different way. In the sentence below

the pronoun her can only refer to a female that is not Ashley. This means that it can never have a reflexive meaning equivalent to Ashley hit herself. The grammatical and ungrammatical interpretations are:

Thus, it can be seen that reflexives and reciprocals are bound variables (known technically as anaphors) while true pronouns are free variables in some grammatical structures but variables that cannot be bound in other grammatical structures. The binding phenomena found in natural languages was particularly important to the syntactic government and binding theory (see also: Binding (linguistics)).