be a graph, and for each edge from

be the capacity and

be the flow. We want to find the maximum flow from the source

. After every step in the algorithm the following is maintained:

This means that the flow through the network is a legal flow after each round in the algorithm. We define the residual network

to be the network with capacity

and no flow. Notice that it can happen that a flow from

Inputs Given a Network

, and a sink node

. If you use the former, the algorithm is called Edmonds–Karp.

When no more paths in step 2 can be found,

will not be able to reach

in the residual network. If

is the set of nodes reachable by

in the residual network, then the total capacity in the original network of edges from

to the remainder of

, and on the other hand serves as an upper bound for all such flows. This proves that the flow we found is maximal. See also Max-flow Min-cut theorem.

has multiple sources and sinks, we act as follows: Suppose that

. And add a new sink

. Then apply the Ford–Fulkerson algorithm.

Also, if a node

, we replace this node with two nodes

. Then apply the Ford–Fulkerson algorithm.

By adding the flow augmenting path to the flow already established in the graph, the maximum flow will be reached when no more flow augmenting paths can be found in the graph. However, there is no certainty that this situation will ever be reached, so the best that can be guaranteed is that the answer will be correct if the algorithm terminates. In the case that the algorithm runs forever, the flow might not even converge towards the maximum flow. However, this situation only occurs with irrational flow values. When the capacities are integers, the runtime of Ford-Fulkerson is bounded by

is the number of edges in the graph and

is the maximum flow in the graph. This is because each augmenting path can be found in

A variation of the Ford–Fulkerson algorithm with guaranteed termination and a runtime independent of the maximum flow value is the Edmonds–Karp algorithm, which runs in

The following example shows the first steps of Ford–Fulkerson in a flow network with 4 nodes, source

. This example shows the worst-case behaviour of the algorithm. In each step, only a flow of

is sent across the network. If breadth-first-search were used instead, only two steps would be needed.

Notice how flow is "pushed back" from

when finding the path 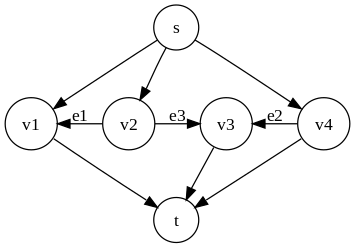 Consider the flow network shown on the right, with source

and the capacity of all other edges some integer

was chosen so, that

. We use augmenting paths according to the following table, where

Note that after step 1 as well as after step 5, the residual capacities of edges

are in the form

. This means that we can use augmenting paths

infinitely many times and residual capacities of these edges will always be in the same form. Total flow in the network after step 5 is

. If we continue to use augmenting paths as above, the total flow converges to

, while the maximum flow is

. In this case, the algorithm never terminates and the flow doesn't even converge to the maximum flow.[2]

For the example flow network in maximum flow problem we do the following: