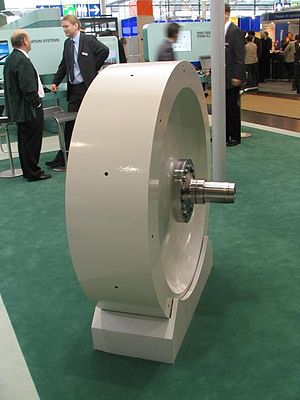 Common uses of a flywheel include:

Flywheels are typically made of steel and rotate on conventional bearings; these are generally limited to a revolution rate of a few thousand RPM.[1] Some modern flywheels are made of carbon fiber materials and employ magnetic bearings, enabling them to revolve at speeds up to 60,000 RPM.[2]

Carbon-composite flywheel batteries have recently been manufactured and are proving to be viable in real-world tests on mainstream cars. Additionally, their disposal is more eco-friendly.[3]

A Landini tractor with exposed flywheel.

Flywheels are often used to provide continuous energy in systems where the energy source is not continuous. In such cases, the flywheel stores energy when torque is applied by the energy source, and it releases stored energy when the energy source is not applying torque to it. For example, a flywheel is used to maintain constant angular velocity of the crankshaft in a reciprocating engine. In this case, the flywheel—which is mounted on the crankshaft—stores energy when torque is exerted on it by a firing piston, and it releases energy to its mechanical loads when no piston is exerting torque on it. Other examples of this are friction motors, which use flywheel energy to power devices such as toy cars. 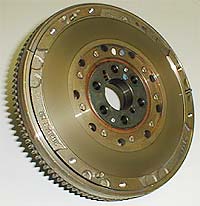 A flywheel may also be used to supply intermittent pulses of energy at transfer rates that exceed the abilities of its energy source, or when such pulses would disrupt the energy supply (e.g., public electric network). This is achieved by accumulating stored energy in the flywheel over a period of time, at a rate that is compatible with the energy source, and then releasing that energy at a much higher rate over a relatively short time. For example, flywheels are used in riveting machines to store energy from the motor and release it during the riveting operation.

The phenomenon of precession has to be considered when using flywheels in vehicles. A rotating flywheel responds to any momentum that tends to change the direction of its axis of rotation by a resulting precession rotation. A vehicle with a vertical-axis flywheel would experience a lateral momentum when passing the top of a hill or the bottom of a valley (roll momentum in response to a pitch change). Two counter-rotating flywheels may be needed to eliminate this effect. This effect is leveraged in reaction wheels, a type of flywheel employed in satellites in which the flywheel is used to orient the satellite's instruments without thruster rockets.

The principle of the flywheel is found in the Neolithic spindle and the potter's wheel.[4]

The flywheel as a general mechanical device for equalizing the speed of rotation is, according to the American medievalist Lynn White, recorded in the De diversibus artibus (On various arts) of the German artisan Theophilus Presbyter (ca. 1070–1125) who records applying the device in several of his machines.[4][5]

In the Industrial Revolution, James Watt contributed to the development of the flywheel in the steam engine, and his contemporary James Pickard used a flywheel combined with a crank to transform reciprocating into rotary motion.

A flywheel is a spinning wheel or disc with a fixed axle so that rotation is only about one axis. Energy is stored in the rotor as kinetic energy, or more specifically, rotational energy:

Where m denotes mass, and r denotes a radius.

When calculating with SI units, the standards would be for mass, kilograms; for radius, meters; and for angular velocity, radians per second. The resulting answer would be in joules.

The amount of energy that can safely be stored in the rotor depends on the point at which the rotor will warp or shatter. The hoop stress on the rotor is a major consideration in the design of a flywheel energy storage system.

This formula can also be simplified using specific tensile strength and tangent velocity:

For a given flywheel design, the kinetic energy is proportional to the ratio of the hoop stress to the material density and to the mass:

For a given design the stored energy is proportional to the hoop stress and the volume:

For example, if the moments of inertia of hub, spokes and shaft are deemed negligible, and the rim's thickness is very small compared to its mean radius (

), the radius of rotation of the rim is equal to its mean radius and thus: