Finite volume method in computational fluid dynamics is a discretization technique for partial differential equations that arise from physical conservation laws. These equations can be different in nature, e.g. elliptic, parabolic, or hyperbolic. First well-documented use was by Evans and Harlow (1957) at Los Alamos. The general equation for steady diffusion can be easily be derived from the general transport equation for property Φ by deleting transient and convective terms.[1]

General Transport equation can be define as

is conservative form of all fluid flow,

is the Diffusion coefficient[2] and

is Net rate of flow of

Conditions under which the transient and convective terms goes to zero: 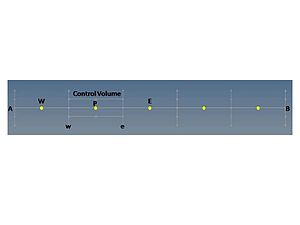 is average value of source S over control volume