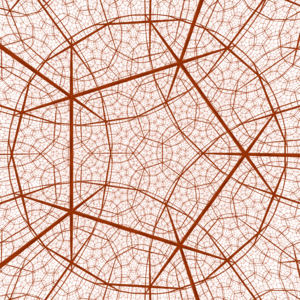 A perspective projection of a dodecahedral tessellation in H3. Note the recursive structure: each pentagon contains smaller pentagons, which contain smaller pentagons. This is an example of a subdivision rule arising from a finite universe (i.e. a closed 3-manifold).

In mathematics, a finite subdivision rule is a recursive way of dividing a polygon or other two-dimensional shape into smaller and smaller pieces. Subdivision rules in a sense are generalizations of fractals. Instead of repeating exactly the same design over and over, they have slight variations in each stage, allowing a richer structure while maintaining the elegant style of fractals.[1] Subdivision rules have been used in architecture, biology, and computer science, as well as in the study of hyperbolic manifolds. Substitution tilings are a well-studied type of subdivision rule.

For instance, binary subdivision has one tile type and one edge type:

The Penrose tiling can be generated by a subdivision rule on a set of four tile types (the curved lines in the table below only help to show how the tiles fit together):

And this is the subdivision rule for the Borromean rings, which is hyperbolic:

In each case, the subdivision rule would act on some tiling of a sphere (i.e. the night sky), but it is easier to just draw a small part of the night sky, corresponding to a single tile being repeatedly subdivided. This is what happens for the trefoil knot: 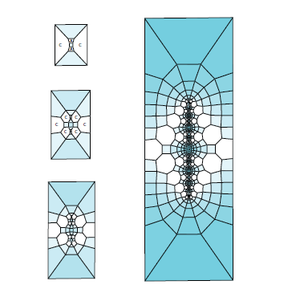 And for the Borromean rings: 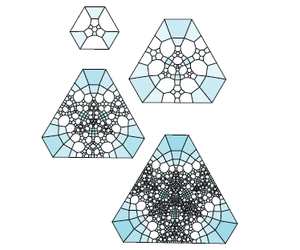 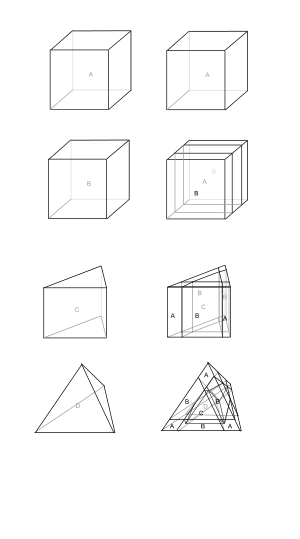 consists of the following.[1]

, called the subdivision complex, with a fixed cell structure such that

there is a CW structure

on a closed 2-disk such that

has at least two vertices, the vertices and edges of

, and the characteristic map

restricts to a homeomorphism onto each open cell.

, which is a subdivision of

called the subdivision map, whose restriction to every open cell is a homeomorphism.

in the definition above (with its given characteristic map

) is called a tile type.

-complex for a subdivision rule

is a 2-dimensional CW complex

which is the union of its closed 2-cells, together with a continuous cellular map

whose restriction to each open cell is a homeomorphism. We can subdivide

by requiring that the induced map

restricts to a homeomorphism onto each open cell.

. By repeating this process, we obtain a sequence of subdivided

Binary subdivision is one example:[5]

into a torus. The subdivision map

given by the standard covering map. Under subdivision, each square in the plane gets subdivided into squares of one-fourth the size.

The history graph of the middle thirds subdivision rule.

, we can construct a graph called the history graph that records the action of the subdivision rule. The graph consists of the dual graphs of every stage

, together with edges connecting each tile in

with its subdivisions in

Islamic Girih tiles in Islamic architecture are self-similar tilings that can be modeled with finite subdivision rules.[7] In 2007, Peter J. Lu of Harvard University and Professor Paul J. Steinhardt of Princeton University published a paper in the journal Science suggesting that girih tilings possessed properties consistent with self-similar fractal quasicrystalline tilings such as Penrose tilings (presentation 1974, predecessor works starting in about 1964) predating them by five centuries.[8][9]

Subdivision rules were applied by Cannon, Floyd and Parry (2000) to the study of large-scale growth patterns of biological organisms.[5] Cannon, Floyd and Parry produced a mathematical growth model which demonstrated that some systems determined by simple finite subdivision rules can results in objects (in their example, a tree trunk) whose large-scale form oscillates wildly over time even though the local subdivision laws remain the same.[5] Cannon, Floyd and Parry also applied their model to the analysis of the growth patterns of rat tissue.[5] They suggested that the "negatively curved" (or non-euclidean) nature of microscopic growth patterns of biological organisms is one of the key reasons why large-scale organisms do not look like crystals or polyhedral shapes but in fact in many cases resemble self-similar fractals.[5] In particular they suggested that such "negatively curved" local structure is manifested in highly folded and highly connected nature of the brain and the lung tissue.[5]

Cannon's conjecture: Every Gromov hyperbolic group with a 2-sphere at infinity acts geometrically on hyperbolic 3-space.[6]

Here, a geometric action is a cocompact, properly discontinuous action by isometries. This conjecture was partially solved by Grigori Perelman in his proof[11][12][13] of the Geometrization conjecture, which states (in part) than any Gromov hyperbolic group that is a 3-manifold group must act geometrically on hyperbolic 3-space. However, it still remains to show that a Gromov hyperbolic group with a 2-sphere at infinity is a 3-manifold group.

Subdivision rules give a sequence of tilings of a surface, and tilings give an idea of distance, length, and area (by letting each tile have length and area 1). In the limit, the distances that come from these tilings may converge in some sense to an analytic structure on the surface. The Combinatorial Riemann Mapping Theorem gives necessary and sufficient conditions for this to occur.[6]

Its statement needs some background. A tiling

, called approximate moduli. These are similar to the classical modulus of a ring. They are defined by the use of weight functions. A weight function

can be given a length, defined to be the sum of the weights of all tiles in the path. Define the height

to the outer boundary. The circumference

is the infimum of the length of all possible paths circling the ring (i.e. not nullhomotopic in R). The area

Note that they are invariant under scaling of the metric.

of tilings is conformal (

) if mesh approaches 0 and:

of tilings of a surface is conformal (

) in the above sense, then there is a conformal structure on the surface and a constant

in which the classical moduli and approximate moduli (from

sufficiently large) of any given annulus are

-comparable, meaning that they lie in a single interval

The Combinatorial Riemann Mapping Theorem implies that a group

if and only if it is Gromov hyperbolic, it has a sphere at infinity, and the natural subdivision rule on the sphere gives rise to a sequence of tilings that is conformal in the sense above. Thus, Cannon's conjecture would be true if all such subdivision rules were conformal.[14]