In mathematics, F4 is the name of a Lie group and also its Lie algebra f4. It is one of the five exceptional simple Lie groups. F4 has rank 4 and dimension 52. The compact form is simply connected and its outer automorphism group is the trivial group. Its fundamental representation is 26-dimensional.

The compact real form of F4 is the isometry group of a 16-dimensional Riemannian manifold known as the octonionic projective plane OP2. This can be seen systematically using a construction known as the magic square, due to Hans Freudenthal and Jacques Tits.

There are 3 real forms: a compact one, a split one, and a third one. They are the isometry groups of the three real Albert algebras.

The F4 Lie algebra may be constructed by adding 16 generators transforming as a spinor to the 36-dimensional Lie algebra so(9), in analogy with the construction of E8.

In older books and papers, F4 is sometimes denoted by E4.

Its Weyl/Coxeter group is the symmetry group of the 24-cell: it is a solvable group of order 1152.

The F4 lattice is a four-dimensional body-centered cubic lattice (i.e. the union of two hypercubic lattices, each lying in the center of the other). They form a ring called the Hurwitz quaternion ring. The 24 Hurwitz quaternions of norm 1 form the vertices of a 24-cell centered at the origin. 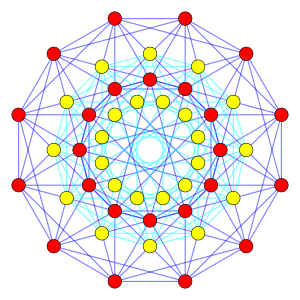 The 48 root vectors of F4 can be found as the vertices of the 24-cell in two dual configurations:

One choice of simple roots for F4, Template:Dynkin2, is given by the rows of the following matrix: 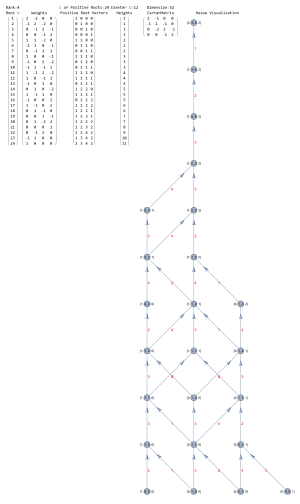 Where x, y, z are real valued and X, Y, Z are octonion valued. Another way of writing these invariants is as (combinations of) Tr(M), Tr(M2) and Tr(M3) of the hermitian octonion matrix:

There are two non-isomorphic irreducible representations of dimensions 1053, 160056, 4313088, etc. The fundamental representations are those with dimensions 52, 1274, 273, 26 (corresponding to the four nodes in the Dynkin diagram in the order such that the double arrow points from the second to the third).