Top and bottom envelope functions for a modulated sine wave. 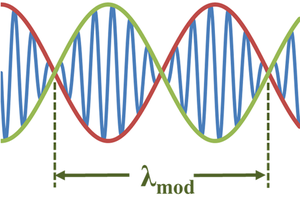 A common situation resulting in an envelope function in both space x and time t is the superposition of two waves of almost the same wavelength and frequency:[2]

which uses the trigonometric f ula for the addition of two sine waves, and the approximation Δλ<<λ:

Here the modulation wavelength λmod is given by:[2][3]

If this wave is a sound wave, the ear hears the frequency associated with f and the amplitude of this sound varies with the beat frequency.[4]

The red dot moves with the phase velocity, and the green dots propagate with the group velocity.

The argument of the sinusoids above apart from a factor 2π are:

with subscripts C and E referring to the carrier and the envelope. The same amplitude F of the wave results for the same value of ξC and ξE, and a particular value results for many different but properly related choices of x and t. This invariance means that one can trace these waveforms in space to find the speed of a position of fixed amplitude as it propagates in time; for the argument of the carrier wave to stay the same, the condition is:

On the other hand, the same considerations show the envelope propagates at the so-called group velocity vg:[5]

A more common expression for the group velocity is obtained by introducing the wavevector k:

We notice that for small changes Δλ, the magnitude of the corresponding small change in wavevector, say Δk, is:

so the group velocity can be rewritten as:

where ω is the frequency in radians/s: ω = 2πf. In all media, frequency and wavevector are related by a dispersion relation, ω = ω(k), and the group velocity can be written:

Dispersion relation ω=ω(k) for some waves corresponding to lattice vibrations in GaAs.[6]

In a medium such as classical vacuum the dispersion relation for electromagnetic waves is:

where c0 is the speed of light in classical vacuum. For this case, the phase and group velocities both are c0.

In so-called dispersive media the dispersion relation can be a complicated function of wavevector, and the phase and group velocities are not the same. For example, for several types of waves exhibited by atomic vibrations (phonons) in GaAs, the dispersion relations are shown in the figure for various directions of wavevector k. In the general case, the phase and group velocities may have different directions.[7]

Electron probabilities in lowest two quantum states of a 160Ǻ GaAs quantum well in a GaAs-GaAlAs heterostructure as calculated from envelope functions.[8]

In condensed matter physics an energy eigenfunction for a mobile charge carrier in a crystal can be expressed as a Bloch wave:

where n is the index for the band (for example, conduction or valence band) r is a spatial location, and k is a wavevector. The exponential is a sinusoidally varying function corresponding to a slowly varying envelope modulating the rapidly varying part of the wavefunction un,k describing the behavior of the wavefunction close to the cores of the atoms of the lattice. The envelope is restricted to k-values within a range limited by the Brillouin zone of the crystal, and that limits how rapidly it can vary with location r.

In determining the behavior of the carriers using quantum mechanics, the envelope approximation usually is used in which the Schrödinger equation is simplified to refer only to the behavior of the envelope, and boundary conditions are applied to the envelope function directly, rather than to the complete wavefunction.[9] For example, the wavefunction of a carrier trapped near an impurity is governed by an envelope function F that governs a superposition of Bloch functions:

where the Fourier components of the envelope F(k) are found from the approximate Schrödinger equation.[10] In some applications, the periodic part uk is replaced by its value near the band edge, say k=k0, and then:[9]

Diffraction pattern of a double slit has a single-slit envelope.

where α is the diffraction angle, d is the slit width, and λ is the wavelength. For multiple slits, the pattern is [11]