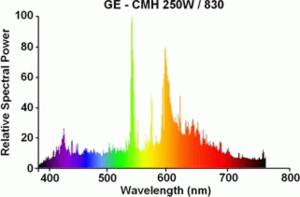 The emission spectrum of a chemical element or chemical compound is the spectrum of frequencies of electromagnetic radiation emitted due to an atom or molecule making a transition from a high energy state to a lower energy state. The energy of the emitted photon is equal to the energy difference between the two states. There are many possible electron transitions for each atom, and each transition has a specific energy difference. This collection of different transitions, leading to different radiated wavelengths, make up an emission spectrum. Each element's emission spectrum is unique. Therefore, spectroscopy can be used to identify the elements in matter of unknown composition. Similarly, the emission spectra of molecules can be used in chemical analysis of substances.

In physics, emission is the process by which a higher energy quantum mechanical state of a particle becomes converted to a lower one through the emission of a photon, resulting in the production of light. The frequency of light emitted is a function of the energy of the transition. Since energy must be conserved, the energy difference between the two states equals the energy carried off by the photon. The energy states of the transitions can lead to emissions over a very large range of frequencies. For example, visible light is emitted by the coupling of electronic states in atoms and molecules (then the phenomenon is called fluorescence or phosphorescence). On the other hand, nuclear shell transitions can emit high energy gamma rays, while nuclear spin transitions emit low energy radio waves.

The emittance of an object quantifies how much light is emitted by it. This may be related to other properties of the object through the Stefan–Boltzmann law. For most substances, the amount of emission varies with the temperature and the spectroscopic composition of the object, leading to the appearance of color temperature and emission lines. Precise measurements at many wavelengths allow the identification of a substance via emission spectroscopy.

Emission of radiation is typically described using semi-classical quantum mechanics: the particle's energy levels and spacings are determined from quantum mechanics, and light is treated as an oscillating electric field that can drive a transition if it is in resonance with the system's natural frequency. The quantum mechanics problem is treated using time-dependent perturbation theory and leads to the general result known as Fermi's golden rule. The description has been superseded by quantum electrodynamics, although the semi-classical version continues to be more useful in most cases.

When the electrons in the atom are excited, for example by being heated, the additional energy pushes the electrons to higher energy orbitals. When the electrons fall back down and leave the excited state, energy is re-emitted in the form of a photon. The wavelength (or equivalently, frequency) of the photon is determined by the difference in energy between the two states. These emitted photons form the element's spectrum.

is the energy of the photon,

is its frequency, and

is Planck's constant. This concludes that only photons with specific energies are emitted by the atom. The principle of the atomic emission spectrum explains the varied colors in neon signs, as well as chemical flame test results (described below).

The frequencies of light that an atom can emit are dependent on states the electrons can be in. When excited, an electron moves to a higher energy level or orbital. When the electron falls back to its ground level the light is emitted.

The above picture shows the visible light emission spectrum for hydrogen. If only a single atom of hydrogen were present, then only a single wavelength would be observed at a given instant. Several of the possible emissions are observed because the sample contains many hydrogen atoms that are in different initial energy states and reach different final energy states. These different combinations lead to simultaneous emissions at different wavelengths.

As well as the electronic transitions discussed above, the energy of a molecule can also change via rotational, vibrational, and vibronic (combined vibrational and electronic) transitions. These energy transitions often lead to closely spaced groups of many different spectral lines, known as spectral bands. Unresolved band spectra may appear as a spectral continuum.

Light consists of electromagnetic radiation of different wavelengths. Therefore, when the elements or their compounds are heated either on a flame or by an electric arc they emit energy in the form of light. Analysis of this light, with the help of a spectroscope gives us a discontinuous spectrum. A spectroscope or a spectrometer is an instrument which is used for separating the components of light, which have different wavelengths. The spectrum appears in a series of lines called the line spectrum. This line spectrum is also called the Atomic Spectrum because it originates in the element. Each element has a different atomic spectrum. The production of line spectra by the atoms of an element indicate that an atom can radiate only a certain amount of energy. This leads to the conclusion that bound electrons cannot have just any amount of energy but only a certain amount of energy.

The emission spectrum can be used to determine the composition of a material, since it is different for each element of the periodic table. One example is astronomical spectroscopy: identifying the composition of stars by analysing the received light. The emission spectrum characteristics of some elements are plainly visible to the naked eye when these elements are heated. For example, when platinum wire is dipped into a strontium nitrate solution and then inserted into a flame, the strontium atoms emit a red color. Similarly, when copper is inserted into a flame, the flame becomes green. These definite characteristics allow elements to be identified by their atomic emission spectrum. Not all emitted lights are perceptible to the naked eye, as the spectrum also includes ultraviolet rays and infrared lighting. An emission is formed when an excited gas is viewed directly through a spectroscope. 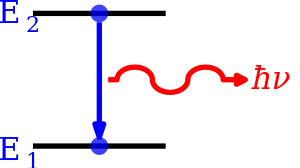 Emission spectroscopy is a spectroscopic technique which examines the wavelengths of photons emitted by atoms or molecules during their transition from an excited state to a lower energy state. Each element emits a characteristic set of discrete wavelengths according to its electronic structure, and by observing these wavelengths the elemental composition of the sample can be determined. Emission spectroscopy developed in the late 19th century and efforts in theoretical explanation of atomic emission spectra eventually led to quantum mechanics.

There are many ways in which atoms can be brought to an excited state. Interaction with electromagnetic radiation is used in fluorescence spectroscopy, protons or other heavier particles in Particle-Induced X-ray Emission and electrons or X-ray photons in Energy-dispersive X-ray spectroscopy or X-ray fluorescence. The simplest method is to heat the sample to a high temperature, after which the excitations are produced by collisions between the sample atoms. This method is used in flame emission spectroscopy, and it was also the method used by Anders Jonas Ångström when he discovered the phenomenon of discrete emission lines in the 1850s.{{ safesubst:#invoke:Unsubst||date=__DATE__ |$B= {{#invoke:Category handler|main}}{{#invoke:Category handler|main}}[citation needed] }}

Although the emission lines are caused by a transition between quantized energy states and may at first look very sharp, they do have a finite width, i.e. they are composed of more than one wavelength of light. This spectral line broadening has many different causes Template:Clarify.

See the history of spectroscopy for details.

The solution containing the relevant substance to be analysed is drawn into the burner and dispersed into the flame as a fine spray. The solvent evaporates first, leaving finely divided solid particles which move to the hottest region of the flame where gaseous atoms and ions are produced. Here electrons are excited as described above. It is common for a monochromator to be used to allow for easy detection.

On a simple level, flame emission spectroscopy can be observed using just a flame and samples of metal salts. This method of qualitative analysis is called a flame test. For example, sodium salts placed in the flame will glow yellow from sodium ions, while strontium (used in road flares) ions color it red. Copper wire will create a blue colored flame, however in the presence of chloride gives green (molecular contribution by CuCl).

Emission coefficient is a coefficient in the power output per unit time of an electromagnetic source, a calculated value in physics. The emission coefficient of a gas varies with the wavelength of the light. It has units of ms−3sr−1.[1] It is also used as a measure of environmental emissions (by mass) per MWh of electricity generated, see: Emission factor.

In Thomson scattering a charged particle emits radiation under incident light. The particle may be an ordinary atomic electron, so emission coefficients have practical applications.

If X dV dΩ dλ is the energy scattered by a volume element dV into solid angle dΩ between wavelengths λ and λ+dλ per unit time then the Emission coefficient is X.

The values of X in Thomson scattering can be predicted from incident flux, the density of the charged particles and their Thomson differential cross section (area/solid angle).

A warm body emitting photons has a monochromatic emission coefficient relating to its temperature and total power radiation. This is sometimes called the second "Einstein coefficient", and can be deduced from quantum mechanical theory.

An energy spectrum is a distribution energy among a large assemblage of particles. It is a statistical representation of the wave energy as a function of the wave frequency, and an empirical estimator of the spectral function. For any given value of energy, it determines how many of the particles have that much energy.

The particles may be atoms, photons or a flux of elementary particles.

The electromagnetic spectrum can also be represented as the distribution of electromagnetic radiation according to energy. The relationship among the wavelength (usually denoted by Greek "

"), the frequency (usually denoted by Greek "

where c is the speed of light and h is Planck's Constant.

An example of an energy spectrum in the physical domain is ocean waves breaking on the shore. For any given interval of time it can be observed that some of the waves are larger than others. Plotting the number of waves against the amplitude (height) for the interval will yield the energy spectrum of the set.[2]

Some modern spectrophotometers, such as the Perkin Elmer 950, include an energy scan option. This is additionally useful in cases where a reference cell is not practical or when absorbance / transmittance is off-scale.[2][3]