Elliptic geometry, also sometimes called Riemannian geometry, is a non-Euclidean geometry, in which, given a line L and a point p outside L, there exists no line parallel to L passing through p, as all lines in elliptic geometry intersect. Elliptic geometry has a variety of properties that differ from those of classical Euclidean plane geometry. For example, the sum of the interior angles of any triangle is always greater than 180°.

The distance between a pair of points is proportional to the angle between their absolute polars.[2]

The name "elliptic" is possibly misleading. It does not imply any direct connection with the curve called an ellipse, but only a rather far-fetched analogy. A central conic is called an ellipse or a hyperbola according as it has no asymptote or two asymptotes. Analogously, a non-Euclidean plane is said to be elliptic or hyperbolic according as each of its lines contains no point at infinity or two points at infinity.[3] 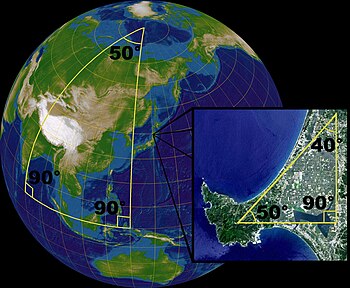 A simple way to picture elliptic geometry is to look at a globe. Neighboring lines of longitude appear to be parallel at the equator, yet they intersect at the poles.

More precisely, the surface of a sphere is a model of elliptic geometry if lines are modeled by great circles, and points at each other's antipodes are considered to be the same point. With this identification of antipodal points, the model satisfies Euclid's first postulate, which states that two points uniquely determine a line. If the antipodal points were considered to be distinct, as in spherical geometry, then uniqueness would be violated, e.g., the lines of longitude on the Earth's surface all pass through both the north pole and the south pole.

Although models such as the spherical model are useful for visualization and for proof of the theory's self-consistency, neither a model nor an embedding in a higher-dimensional space is logically necessary. For example, Einstein's theory of general relativity has static solutions in which space containing a gravitational field is (locally) described by three-dimensional elliptic geometry, but the theory does not posit the existence of a fourth spatial dimension, or even suggest any way in which the existence of a higher-dimensional space could be detected. (This is unrelated to the treatment of time as a fourth dimension in relativity.) Metaphorically, we can imagine geometers who are like ants living on the surface of a sphere. Even if the ants are unable to move off the surface, they can still construct lines and verify that parallels do not exist. The existence of a third dimension is irrelevant to the ants' ability to do geometry, and its existence is neither verifiable nor necessary from their point of view. Another way of putting this is that the language of the theory's axioms is incapable of expressing the distinction between one model and another.

In Euclidean geometry, a figure can be scaled up or scaled down indefinitely, and the resulting figures are similar, i.e., they have the same angles and the same internal proportions. In elliptic geometry this is not the case. For example, in the spherical model we can see that the distance between any two points must be strictly less than half the circumference of the sphere (because antipodal points are identified). A line segment therefore cannot be scaled up indefinitely. A geometer measuring the geometrical properties of the space he or she inhabits can detect, via measurements, that there is a certain distance scale that is a property of the space. On scales much smaller than this one, the space is approximately flat, geometry is approximately Euclidean, and figures can be scaled up and down while remaining approximately similar.

A great deal of Euclidean geometry carries over directly to elliptic geometry. For example, the first and fourth of Euclid's postulates, that there is a unique line between any two points and that all right angles are equal, hold in elliptic geometry. Postulate 3, that one can construct a circle with any given center and radius, fails if "any radius" is taken to mean "any real number", but holds if it is taken to mean "the length of any given line segment". Therefore any result in Euclidean geometry that follows from these three postulates will hold in elliptic geometry, such as proposition 1 from book I of the Elements, which states that given any line segment, an equilateral triangle can be constructed with the segment as its base.

Elliptic geometry is also like Euclidean geometry in that space is continuous, homogeneous, isotropic, and without boundaries. Isotropy is guaranteed by the fourth postulate, that all right angles are equal. For an example of homogeneity, note that Euclid's proposition I.1 implies that the same equilateral triangle can be constructed at any location, not just in locations that are special in some way. The lack of boundaries follows from the second postulate, extensibility of a line segment.

One way in which elliptic geometry differs from Euclidean geometry is that the sum of the interior angles of a triangle is greater than 180 degrees. In the spherical model, for example, a triangle can be constructed with vertices at the locations where the three positive Cartesian coordinate axes intersect the sphere, and all three of its internal angles are 90 degrees, summing to 270 degrees. For sufficiently small triangles, the excess over 180 degrees can be made arbitrarily small.

The Pythagorean theorem fails in elliptic geometry. In the 90°–90°–90° triangle described above, all three sides have the same length, and consequently do not satisfy

. The Pythagorean result is recovered in the limit of small triangles.

The ratio of a circle's circumference to its area is smaller than in Euclidean geometry. In general, area and volume do not scale as the second and third powers of linear dimensions.

{{#invoke:see also|seealso}} The three-dimensional elliptic geometry makes use of the 3-sphere S3, and these points are well-accessed with the versors in the theory of quaternions. A versor is a quaternion of norm one, which must necessarily have the form

The origin corresponds to a = 0 and is the identity of the topological group consisting of versors. With Template:Mvar fixed, the versors

form an elliptic line. The distance from

to 1 is a. For an arbitrary versor Template:Mvar, the distance will be that θ for which cos θ = (u + u∗)/2 since this is the formula for the scalar part of any quaternion.

An elliptic motion is described by the quaternion mapping

Distances between points are the same as between image points of an elliptic motion. In the case that Template:Mvar and Template:Mvar are quaternion conjugates of one another, the motion is a spatial rotation, and their vector part is the axis of rotation. In the case u = 1 the elliptic motion is called a right Clifford translation, or a parataxy. The case v = 1 corresponds to left Clifford translation.

Elliptic lines through versor Template:Mvar may be of the form

They are the right and left Clifford translations of Template:Mvar along an elliptic line through 1. The elliptic space is formed by identifying antipodal points on S3.[4]

The points of n-dimensional projective space can be identified with lines through the origin in (n + 1)-dimensional space, and can be represented non-uniquely by nonzero vectors in Rn+1, with the understanding that Template:Mvar and λu, for any non-zero scalar λ, represent the same point. Distance is defined using the metric

that is, the distance between two points is the angle between their corresponding lines in Rn+1. The distance formula is homogeneous in each variable, with d(λu, μv) = d(u, v) if λ and μ are non-zero scalars, so it does define a distance on the points of projective space.

A notable property of the projective elliptic geometry is that for even dimensions, such as the plane, the geometry is non-orientable. It erases the distinction between clockwise and counterclockwise rotation by identifying them.

A model representing the same space as the hyperspherical model can be obtained by means of stereographic projection. Let En represent Rn ∪ {∞}, that is, Template:Mvar-dimensional real space extended by a single point at infinity. We may define a metric, the chordal metric, on En by

is the usual Euclidean norm. We also define

The result is a metric space on En, which represents the distance along a chord of the corresponding points on the hyperspherical model, to which it maps bijectively by stereographic projection. We obtain a model of spherical geometry if we use the metric