{{ safesubst:#invoke:Unsubst||$N=Refimprove |date=__DATE__ |$B= {{#invoke:Message box|ambox}} }} In mathematics, a distributive lattice is a lattice in which the operations of join and meet distribute over each other. The prototypical examples of such structures are collections of sets for which the lattice operations can be given by set union and intersection. Indeed, these lattices of sets describe the scenery completely: every distributive lattice is – up to isomorphism – given as such a lattice of sets.

As in the case of arbitrary lattices, one can choose to consider a distributive lattice L either as a structure of order theory or of universal algebra. Both views and their mutual correspondence are discussed in the article on lattices. In the present situation, the algebraic description appears to be more convenient:

A lattice (L,∨,∧) is distributive if the following additional identity holds for all x, y, and z in L:

Viewing lattices as partially ordered sets, this says that the meet operation preserves non-empty finite joins. It is a basic fact of lattice theory that the above condition is equivalent to its dual:[1]

In every lattice, defining p≤q as usual to mean p∧q=p, the inequation x ∧ (y ∨ z) ≥ (x ∧ y) ∨ (x ∧ z) holds as well as its dual inequation x ∨ (y ∧ z) ≤ (x ∨ y) ∧ (x ∨ z). A lattice is distributive if one of the converse inequations holds, too. More information on the relationship of this condition to other distributivity conditions of order theory can be found in the article on distributivity (order theory). 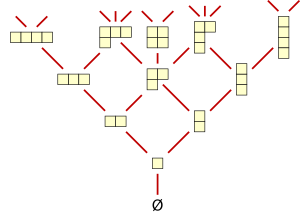 Early in the development of the lattice theory Charles S. Peirce believed that all lattices are distributive, that is, distributivity follows from the rest of the lattice axioms.[3][4] However, independence proofs were given by Schröder, Voigt,(de) Lüroth, Korselt,[5] and Dedekind.[3]

Various equivalent formulations to the above definition exist. For example, L is distributive if and only if the following holds for all elements x, y, z in L:

Similarly, L is distributive if and only if

Distributive lattice which contains N5 (solid lines, left) and M3 (right) as subset, but not as sublattice, respectively

The simplest non-distributive lattices are M3, the "diamond lattice", and N5, the "pentagon lattice". A lattice is distributive if and only if none of its sublattices is isomorphic to M3 or N5; a sublattice is a subset that is closed under the meet and join operations of the original lattice. Note that this is not the same as being a subset that is a lattice under the original order (but possibly with different join and meet operations). Further characterizations derive from the representation theory in the next section.

Finally distributivity entails several other pleasant properties. For example, an element of a distributive lattice is meet-prime if and only if it is meet-irreducible, though the latter is in general a weaker property. By duality, the same is true for join-prime and join-irreducible elements.[6] If a lattice is distributive, its covering relation forms a median graph.[7]

The introduction already hinted at the most important characterization for distributive lattices: a lattice is distributive if and only if it is isomorphic to a lattice of sets (closed under set union and intersection). That set union and intersection are indeed distributive in the above sense is an elementary fact. The other direction is less trivial, in that it requires the representation theorems stated below. The important insight from this characterization is that the identities (equations) that hold in all distributive lattices are exactly the ones that hold in all lattices of sets in the above sense.

A further important representation was established by Hilary Priestley in her representation theorem for distributive lattices. In this formulation, a distributive lattice is used to construct a topological space with an additional partial order on its points, yielding a (completely order-separated) ordered Stone space (or Priestley space). The original lattice is recovered as the collection of clopen lower sets of this space.

As a consequence of Stone's and Priestley's theorems, one easily sees that any distributive lattice is really isomorphic to a lattice of sets. However, the proofs of both statements require the Boolean prime ideal theorem, a weak form of the axiom of choice.

The free distributive lattice over a set of generators G can be constructed much more easily than a general free lattice. The first observation is that, using the laws of distributivity, every term formed by the binary operations

on a set of generators can be transformed into the following equivalent normal form:

where the Mi are finite meets of elements of G. Moreover, since both meet and join are commutative and idempotent, one can ignore duplicates and order, and represent a join of meets like the one above as a set of sets:

where the Ni are finite subsets of G. However, it is still possible that two such terms denote the same element of the distributive lattice. This occurs when there are indices j and k such that Nj is a subset of Nk. In this case the meet of Nk will be below the meet of Nj, and hence one can safely remove the redundant set Nk without changing the interpretation of the whole term. Consequently, a set of finite subsets of G will be called irredundant whenever all of its elements Ni are mutually incomparable (with respect to the subset ordering); that is, when it forms an antichain of finite sets.

M | N in S, M in T}. The verification that this structure is a distributive lattice with the required universal property is routine.

The number of elements in free distributive lattices with n generators is given by the Dedekind numbers. These numbers grow rapidly, and are known only for n ≤ 8; they are