Plot of the first few Dirichlet kernels showing its convergence to the Dirac Delta distribution.

In mathematical analysis, the Dirichlet kernel is the collection of functions

It is named after Peter Gustav Lejeune Dirichlet.

The importance of the Dirichlet kernel comes from its relation to Fourier series. The convolution of Dn(x) with any function f of period 2π is the nth-degree Fourier series approximation to f, i.e., we have

is the kth Fourier coefficient of f. This implies that in order to study convergence of Fourier series it is enough to study properties of the Dirichlet kernel. Of particular importance is the fact that the L1 norm of Dn diverges to infinity as n → ∞. One can estimate that

is positive, and the Jensen's inequality for the remaining part, it is also possible to show that:

This lack of uniform integrability is behind many divergence phenomena for the Fourier series. For example, together with the uniform boundedness principle, it can be used to show that the Fourier series of a continuous function may fail to converge pointwise, in rather dramatic fashion. See convergence of Fourier series for further details. 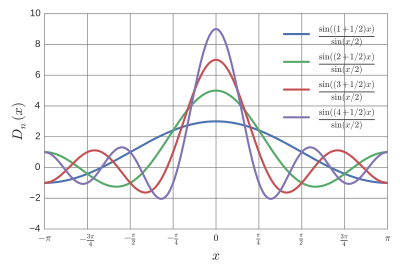 Relation to the delta function

Take the periodic Dirac delta function, which is not really a function, in the sense of mapping one set into another, but is rather a "generalized function", also called a "distribution", and multiply by 2π. We get the identity element for convolution on functions of period 2π. In other words, we have

for every function f of period 2π. The Fourier series representation of this "function" is

Proof of the trigonometric identity

displayed at the top of this article may be established as follows. First recall that the sum of a finite geometric series is

In particular, we have

Multiply both the numerator and the denominator by r−1/2, getting

In the case r = eix we have

Alternative proof of the trigonometric identity

Start with the series

Multiply both sides of the above by

and use the trigonometric identity

If the sum is only over positive integers (which may arise when computing a DFT that is not centered), then using similar techniques we can show the following identity: