In group theory, the direct product is an operation that takes two groups G and H and constructs a new group, usually denoted G × H. This operation is the group-theoretic analogue of the Cartesian product of sets and is one of several important notions of direct product in mathematics.

Given groups G and H, the direct product G × H is defined as follows:

The resulting algebraic object satisfies the axioms for a group. Specifically:

Then the direct product G × H is isomorphic to the Klein four-group:

This follows from the formula for the cardinality of the cartesian product of sets.

This fact is closely related to the Chinese remainder theorem.

These subgroups of P have the following three important properties: (Saying again that we identify G′ and H′ with G and H, respectively.)

In some contexts, the third property above is replaced by the following:

This property is equivalent to property 3, since the elements of two normal subgroups with trivial intersection necessarily commute, a fact which can be deduced by considering the commutator [g,h] of any g in G, h in H.

Then D4n is the internal direct product of the subgroup 〈 r2, s 〉 (which is isomorphic to D2n) and the two-element subgroup { 1, rn }.

The algebraic structure of G × H can be used to give a presentation for the direct product in terms of the presentations of G and H. Specifically, suppose that

where SG and SH are (disjoint) generating sets and RG and RH are defining relations. Then

For example, suppose that 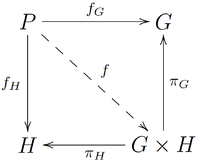 Specifically, the homomorphism ƒ is given by the formula

This is a special case of the universal property for products in category theory.

Similarly, the center of G × H is the product of the centers of G and :

is an automorphism of G × H. It follows that Aut(G × H) has a subgroup isomorphic to the direct product Aut(G) × Aut(H).

It is not true in general that every automorphism of G × H has the above form. (That is, Aut(G) × Aut(H) is often a proper subgroup of Aut(G × H).) For example, if G is any group, then there exists an automorphism σ of G × G that switches the two factors, i.e.

In general, every endomorphism of G × H can be written as a 2 × 2 matrix

When G and H are indecomposable, centerless groups, then the automorphism group is relatively straightforward, being Aut(G) × Aut(H) if G and H are not isomorphic, and Aut(G) wr 2 if G ≅ H, wr denotes the wreath product. This is part of the Krull–Schmidt theorem, and holds more generally for finite direct products.

is defined as follows:

This has many of the same properties as the direct product of two groups, and can be characterized algebraically in a similar way.

More generally, given an indexed family { Gi }i∈I of groups, the direct product ∏i∈I Gi is defined as follows:

{{#invoke:main|main}} Recall that a group P with subgroups G and H is isomorphic to the direct product of G and H as long as it satisfies the following three conditions:

A semidirect product of G and H is obtained by relaxing the third condition, so that only one of the two subgroups G, H is required to be normal. The resulting product still consists of ordered pairs (g, h), but with a slightly more complicated rule for multiplication.

It is also possible to relax the third condition entirely, requiring neither of the two subgroups to be normal. In this case, the group P is referred to as a Zappa–Szép product of G and H.

{{#invoke:main|main}} The free product of G and H, usually denoted G ∗ H, is similar to the direct product, except that the subgroups G and H of G ∗ H are not required to commute. That is, if

are presentations for G and H, then

{{#invoke:main|main}} If G and H are groups, a subdirect product of G and H is any subgroup of G × H which maps surjectively onto G and H under the projection homomorphisms. By Goursat's lemma, every subdirect product is a fiber product, and vice versa.

By Goursat's lemma, every subdirect product is a fiber product, and vice versa.