Waves propagating through a slit one wavelength wide.

Because diffraction is the result of addition of all waves (of given wavelength) along all unobstructed paths, the usual procedure is to consider the contribution of an infinitesimally small neighborhood around a certain path (this contribution is usually called a wavelet) and then integrate over all paths (=add all wavelets) from the source to the detector (or given point on a screen).

The simplest descriptions of diffraction are those in which the situation can be reduced to a two-dimensional problem. For water waves, this is already the case, as water waves propagate only on the surface of the water. For light, we can often neglect one dimension if the diffracting object extends in that direction over a distance far greater than the wavelength. In the case of light shining through small circular holes we will have to take into account the full three-dimensional nature of the problem.

Several qualitative observations can be made of diffraction in general:

The problem of calculating what a diffracted wave looks like, is the problem of determining the phase of each of the simple sources on the incoming wave front. It is mathematically easier to consider the case of far-field or Fraunhofer diffraction, where the point of observation is far from that of the diffracting obstruction, and as a result, involves less complex mathematics than the more general case of near-field or Fresnel diffraction. To make this statement more quantitative, let's consider a diffracting object at the origin that has a size

. For definiteness let's say we are diffracting light and we are interested in what the intensity looks like on a screen a distance

away from the object. At some point on the screen the path length to one side of the object is given by the Pythagorean theorem

If we now consider the situation where

This is the Fresnel approximation. To further simplify things: If the diffracting object is much smaller than the distance

, the last term will contribute much less than a wavelength to the path length, and will then not change the phase appreciably. That is

. The result is the Fraunhofer approximation, which is only valid very far away from the object

Diffraction from an array of narrow slits

Diagram of a two slit diffraction problem, showing the angle to the first minimum, where a path length difference of a half wavelength causes destructive interference.

Multiple-slit arrangements can be mathematically considered as multiple simple wave sources, if the slits are narrow enough. For light, a slit is an opening that is infinitely extended in one dimension, and this has the effect of reducing a wave problem in 3D-space to a simpler problem in 2D-space. The simplest case is that of two narrow slits, spaced a distance

apart. To determine the maxima and minima in the amplitude we must determine the path difference to the first slit and to the second one. In the Fraunhofer approximation, with the observer far away from the slits, the difference in path length to the two slits can be seen from the image to be

Maxima in the intensity occur if this path length difference is an integer number of wavelengths.

The corresponding minima are at path differences of an integer number plus one half of the wavelength:

For an array of slits, positions of the minima and maxima are not changed, the fringes visible on a screen however do become sharper, as can be seen in the image.

To calculate this intensity pattern, one needs to introduce some more sophisticated methods. The mathematical representation of a radial wave is given by

is frequency of the wave and

is the phase of the wave at the slits at time t=0. The wave at a screen some distance away from the plane of the slits is given by the sum of the waves emanating from each of the slits. To make this problem a little easier, we introduce the complex wave

, the real part of which is equal to

The absolute value of this function gives the wave amplitude, and the complex phase of the function corresponds to the phase of the wave.

is referred to as the complex amplitude. With

slits, the total wave at point

on the screen is

Since we are for the moment only interested in the amplitude and relative phase, we can ignore any overall phase factors that are not dependent on

. In the Fraunhofer limit we can neglect terms of order :

in the denominator. The sum becomes

denotes the complex conjugate of 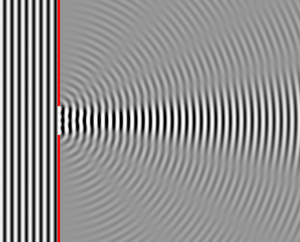 Numerical approximation of diffraction pattern from a slit of width four wavelengths with an incident plane wave. The main central beam, nulls, and phase reversals are apparent.

Graph and image of single-slit diffraction

As an example, an exact equation can now be derived for the intensity of the diffraction pattern as a function of angle in the case of single-slit diffraction.

A mathematical representation of Huygens' principle can be used to start an equation.

of wavelength λ incident on a slit of width a.

If the slit lies in the x′-y′ plane, with its center at the origin, then it can be assumed that diffraction generates a complex wave ψ, traveling radially in the r direction away from the slit, and this is given by:

Let (x′,y′,0) be a point inside the slit over which it is being integrated. If (x,0,z) is the location at which the intensity of the diffraction pattern is being computed, the slit extends from

The distance r from the slot is:

Assuming Fraunhofer diffraction will result in the conclusion

. In other words, the distance to the target is much larger than the diffraction width on the target. By the binomial expansion rule, ignoring terms quadratic and higher, the quantity on the right can be estimated to be:

It can be seen that 1/r in front of the equation is non-oscillatory, i.e. its contribution to the magnitude of the intensity is small compared to our exponential factors. Therefore, we will lose little accuracy by approximating it as 1/z.

To make things cleaner, a placeholder 'C' is used to denote constants in the equation. It is important to keep in mind that C can contain imaginary numbers, thus the wave function will be complex. However, at the end, the ψ will be bracketed, which will eliminate any imaginary components.

participates in this exponential and it is being integrated).

In contrast the term

can be eliminated from the equation, since when bracketed it gives 1.

(For the same reason we have also eliminated the term

It can be noted through Euler's formula and its derivatives that

where the (unnormalized) sinc function is defined by

of the diffracted waves at an angle θ is given by:

Let us again start with the mathematical representation of Huygens' principle.

Consider N slits in the prime plane of equal size a and spacing d spread along the x′ axis. As above, the distance r from slit 1 is:

To generalize this to N slits, we make the observation that while z and y remain constant, x′ shifts by

and the sum of all N contributions to the wave function is:

Now, we can use the following identity

Substituting into our equation, we find:

variable as in the 1-slit diffraction and bracket the result. Remember that

This allows us to discard the tailing exponent and we have our answer:

In the far field, where r is essentially constant, then the equation:

is equivalent to doing a fourier transform on the gaps in the barrier.[1]