The study of dielectric properties concerns storage and dissipation of electric and magnetic energy in materials.[2] Dielectrics are important for explaining various phenomena in electronics, optics, and solid-state physics.

While the term insulator implies low electrical conduction, dielectric typically means materials with a high polarizability. The latter is expressed by a number called the relative permittivity (also known in older texts as dielectric constant). The term insulator is generally used to indicate electrical obstruction while the term dielectric is used to indicate the energy storing capacity of the material (by means of polarization). A common example of a dielectric is the electrically insulating material between the metallic plates of a capacitor. The polarization of the dielectric by the applied electric field increases the capacitor's surface charge for the given electric field strength.[1]

The term "dielectric" was coined by William Whewell (from "dia-electric") in response to a request from Michael Faraday.[3][4] A perfect dielectric is a material with zero electrical conductivity (cf. perfect conductor),[5] thus exhibiting only a displacement current; therefore it stores and returns electrical energy as if it were an ideal capacitor.

The electric susceptibility χe of a dielectric material is a measure of how easily it polarizes in response to an electric field. This, in turn, determines the electric permittivity of the material and thus influences many other phenomena in that medium, from the capacitance of capacitors to the speed of light.

is the electric permittivity of free space.

The susceptibility of a medium is related to its relative permittivity

So in the case of a vacuum,

In general, a material cannot polarize instantaneously in response to an applied field. The more general formulation as a function of time is

That is, the polarization is a convolution of the electric field at previous times with time-dependent susceptibility given by

. The upper limit of this integral can be extended to infinity as well if one defines

It is more convenient in a linear system to take the Fourier transform and write this relationship as a function of frequency. Due to the convolution theorem, the integral becomes a simple product,

Moreover, the fact that the polarization can only depend on the electric field at previous times (i.e.,

), a consequence of causality, imposes Kramers–Kronig constraints on the real and imaginary parts of the susceptibility 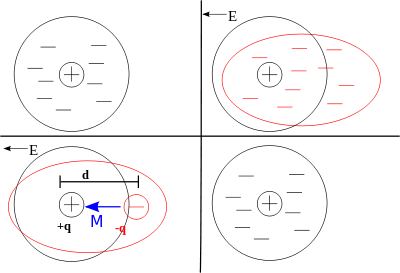 Electric field interaction with an atom under the classical dielectric model.

In the classical approach to the dielectric model, a material is made up of atoms. Each atom consists of a cloud of negative charge (electrons) bound to and surrounding a positive point charge at its center. In the presence of an electric field the charge cloud is distorted, as shown in the top right of the figure.

This can be reduced to a simple dipole using the superposition principle. A dipole is characterized by its dipole moment, a vector quantity shown in the figure as the blue arrow labeled M. It is the relationship between the electric field and the dipole moment that gives rise to the behavior of the dielectric. (Note that the dipole moment points in the same direction as the electric field in the figure. This isn't always the case, and is a major simplification, but is true for many materials.)

When the electric field is removed the atom returns to its original state. The time required to do so is the so-called relaxation time; an exponential decay.

This is the essence of the model in physics. The behavior of the dielectric now depends on the situation. The more complicated the situation, the richer the model must be to accurately describe the behavior. Important questions are:

The relationship between the electric field E and the dipole moment M gives rise to the behavior of the dielectric, which, for a given material, can be characterized by the function F defined by the equation:

When both the type of electric field and the type of material have been defined, one then chooses the simplest function F that correctly predicts the phenomena of interest. Examples of phenomena that can be so modeled include:

When an external electric field is applied, the distance between charges within each permanent dipole, which is related to chemical bonding, remains constant in orientation polarization; however, the direction of polarization itself rotates. This rotation occurs on a timescale that depends on the torque and surrounding local viscosity of the molecules. Because the rotation is not instantaneous, dipolar polarizations lose the response to electric fields at the highest frequencies. A molecule rotates about 1 radian per picosecond in a fluid, thus this loss occurs at about 1011 Hz (in the microwave region). The delay of the response to the change of the electric field causes friction and heat.

When an external electric field is applied at infrared frequencies or less, the molecules are bent and stretched by the field and the molecular dipole moment changes. The molecular vibration frequency is roughly the inverse of the time it takes for the molecules to bend, and this distortion polarization disappears above the infrared.

Ionic polarization is polarization caused by relative displacements between positive and negative ions in ionic crystals (for example, NaCl).

If a crystal or molecule consists of atoms of more than one kind, the distribution of charges around an atom in the crystal or molecule leans to positive or negative. As a result, when lattice vibrations or molecular vibrations induce relative displacements of the atoms, the centers of positive and negative charges are also displaced. The locations of these centers are affected by the symmetry of the displacements. When the centers don't correspond, polarizations arise in molecules or crystals. This polarization is called ionic polarization.

This is one instance of a general phenomenon known as material dispersion: a frequency-dependent response of a medium for wave propagation.

When the frequency becomes higher:

Dielectric relaxation is the momentary delay (or lag) in the dielectric constant of a material. This is usually caused by the delay in molecular polarization with respect to a changing electric field in a dielectric medium (e.g., inside capacitors or between two large conducting surfaces). Dielectric relaxation in changing electric fields could be considered analogous to hysteresis in changing magnetic fields (for inductors or transformers). Relaxation in general is a delay or lag in the response of a linear system, and therefore dielectric relaxation is measured relative to the expected linear steady state (equilibrium) dielectric values. The time lag between electrical field and polarization implies an irreversible degradation of Gibbs free energy.

In physics, dielectric relaxation refers to the relaxation response of a dielectric medium to an external, oscillating electric field. This relaxation is often described in terms of permittivity as a function of frequency, which can, for ideal systems, be described by the Debye equation. On the other hand, the distortion related to ionic and electronic polarization shows behavior of the resonance or oscillator type. The character of the distortion process depends on the structure, composition, and surroundings of the sample.

Debye relaxation is the dielectric relaxation response of an ideal, noninteracting population of dipoles to an alternating external electric field. It is usually expressed in the complex permittivity

of a medium as a function of the field's frequency

is the permittivity at the high frequency limit,

is the static, low frequency permittivity, and

is the characteristic relaxation time of the medium.

This relaxation model was introduced by and named after the physicist Peter Debye (1913).[6]

Variants of the Debye equation

Paraelectricity is the ability of many materials (specifically ceramic crystals) to become polarized under an applied electric field. Unlike ferroelectricity, this can happen even if there is no permanent electric dipole that exists in the material, and removal of the fields results in the polarization in the material returning to zero.[7] The mechanisms that cause paraelectric behaviour are the distortion of individual ions (displacement of the electron cloud from the nucleus) and polarization of molecules or combinations of ions or defects.

Paraelectricity occurs in crystal phases where electric dipoles are unaligned (i.e., unordered domains that are electrically charged) and thus have the potential to align in an external electric field and strengthen it. In comparison to the ferroelectric phase, the domains are unordered and the internal field is weak.

The LiNbO3 crystal is ferroelectric below 1430 K, and above this temperature it transforms into a disordered paraelectric phase. Similarly, other perovskites also exhibit paraelectricity at high temperatures.

Paraelectricity has been explored as a possible refrigeration mechanism; polarizing a paraelectric by applying an electric field under adiabatic process conditions raises the temperature, while removing the field lowers the temperature.[8] A heat pump that operates by polarizing the paraelectric, allowing it to return to ambient temperature (by dissipating the extra heat), bringing it into contact with the object to be cooled, and finally depolarizing it, would result in refrigeration.

Tunable dielectrics are insulators whose ability to store electrical charge changes when a voltage is applied.[9][10]

Systems such as Template:Chem have a paraelectric–ferroelectric transition just below ambient temperature, providing high tunability. Such films suffer significant losses arising from defects.Here we report the experimental realization of a highly tunable ground state arising from the emergence of a local ferroelectric instability in biaxially strained Srn+1TinO3n+1 phases with n ≥ 3 at frequencies up to 125 GHz. In contrast to traditional methods of modifying ferroelectrics — doping or strain — in this unique system an increase in the separation between the (SrO)2 planes, which can be achieved by changing n, bolsters the local ferroelectric instability. This new control parameter, n, can be exploited to achieve a figure of merit at room temperature that rivals all known tunable microwave dielectrics.[9]

Charge separation in a parallel-plate capacitor causes an internal electric field. A dielectric (orange) reduces the field and increases the capacitance.

Commercially manufactured capacitors typically use a solid dielectric material with high permittivity as the intervening medium between the stored positive and negative charges. This material is often referred to in technical contexts as the capacitor dielectric.[13]

The most obvious advantage to using such a dielectric material is that it prevents the conducting plates, on which the charges are stored, from coming into direct electrical contact. More significantly, however, a high permittivity allows a greater stored charge at a given voltage. This can be seen by treating the case of a linear dielectric with permittivity ε and thickness

and the capacitance per unit area by

From this, it can easily be seen that a larger ε leads to greater charge stored and thus greater capacitance.

Dielectric materials used for capacitors are also chosen such that they are resistant to ionization. This allows the capacitor to operate at higher voltages before the insulating dielectric ionizes and begins to allow undesirable current.

A dielectric resonator oscillator (DRO) is an electronic component that exhibits resonance of the polarization response for a narrow range of frequencies, generally in the microwave band. It consists of a "puck" of ceramic that has a large dielectric constant and a low dissipation factor. Such resonators are often used to provide a frequency reference in an oscillator circuit. An unshielded dielectric resonator can be used as a Dielectric Resonator Antenna (DRA).

Dielectric materials can be solids, liquids, or gases. In addition, a high vacuum can also be a useful, nearly lossless dielectric even though its relative dielectric constant is only unity.